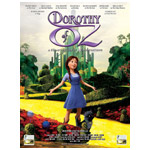 Although the upcoming CG-animated feature Dorothy of Oz is slated to open in theaters this year, we’ve seen very little news coverage about the pic, which is directed by Disney veteran Dan St. Pierre. This week, TV entertainment magazine ET offers a behind-the-scenes video about the making of the movie, which features Glee star Lea Michele as the iconic Dorothy Gale.

In addition to Michele, the film features the voices of Patrick Stewart, Hugh Dancy, Bernadette Peters, and Megan Hilty. Bryan Adams, Tift Merrit, Jim Vallance and Jim Dooley provide the film’s music the. The 3-D CG animation is produced by Summertime Entertainment (Alpine) and was originally slated to be in theaters on August 3rd.