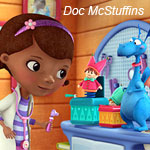 It looks like Mickey Mouse Clubhouse, Jake and the Never Land Pirates, Timmy Time and the rest of the cool animated shows on Disney Junior are getting a great new addition to the team in March. Doc McStuffins, a beautifully animated series about a six-year-old girl who heals stuffed animals and toys in her backyard clinic, is poised to become the next big hit on the Mouse’s special lineup of preschool shows.

Created by Emmy-winning writer/producer Chris Nee (Little Bill, The Wonder Pets) and directed by Emmy winner Norton Virgien (Rugrats), the show is produced by Dublin-based Brown Bag Films. Nee tells us that she pitched the show to Disney Junior’s senior VP of original programming and general manager Nancy Kanter about four years ago.

“I’ve been writing for kids for over 15 years now,” she says. “I pitched the show directly to Nancy and it was one of those rare instances when no middle man was involved. I can’t believe the pitch was about four written pages, with no actual art involved. I guess I am a classic animation writer who can’t draw a stick figure,” she jokes.

Nee says Kanter totally got the idea for the show and decided to push the project through. Then, the next piece of the puzzle, which was the involvement of Irish studio Brown Bag Films, fell into place.

“The development process was a really magical process,” she recalls. “Everything worked beautifully and Brown Bag brought so much talent, dedication and joy to the show.”

According to Nee, Brown Bag, which has produced two Oscar-nominated shorts (Granny O’Grimm’s Sleeping Beauty, Give Up Yer Aul Sins) and several top children’s shows including Olivia, Noddy in Toyland and The Octonauts, played a key role in realizing her vision.

“They came in and delivered all these amazing designs for the characters,” she notes. “We thought we were going to do the show in 2D at first, because we wanted to pay a lot of attention to the characters’ emotions, but then, one day, they e-mailed us this great film and they had rendered them in CG, and it solved one of the great challenge of the show. We needed to know that we were telling stories about toys, rather than animated characters…when you do the characters in 3D, you instantly get that these characters are toys. It was a big gamble on their behalf, but it paid off. We could never go back.”

Both Nee, who has Irish citizenship, and director Virgien moved to Ireland to be closer to the animation team at Brown Bag.

“It’s been wonderful,” says Nee. “We pitch every line of the show to the animation team, and so much of it is about being face to face. It just felt important for us to spend physical time together. Making 26 half-hours is a long, hard and wonderful process, and you need to have that friendship base.”

Nee, who has written for various different age groups, and has even produced the show Deadliest Catch: Crab Fishing in Alaska, says she loves writing for the preschool set.

“A lot of it has to do with the fact that Disney has got back to the idea of strong storytelling,” she adds. “For a while, preschool had gotten away from having really strong characters and comedies, but I’m a comedy writer who loves writing for kids. In the original pitch for the show, I wanted to do a preschool version of Cheers, and I’m amazed that we’ve been able to achieve that—creating a show that features some very distinctive, strong characters.”

One of the production’s biggest challenges was delivering top-notch CG animation (Singapore’s Sparky Animation also contributes to the production) and emotional acting for a weekly series.

“The schedule was tight and audiences are used to seeing some really amazing 3D rigs on the big screen these days,” explains Nee. “When you look back at the first Toy Story, audiences didn’t expect the humans to look very realistic, but by the time the third movie came out, the little girl’s storyline is very engaging, so we knew that audiences weren’t going to grade us on a curved scale!”

The casting of 13-year-old actress Kiara Muhammad as the lead was another big coup for the production.

“She is this amazing kid with very unique reads,” says Nee. “I was really thrilled when Disney agreed to let us have Kiara because she was doing some interesting things with her voice. If we hadn’t pushed those rigs enough, they wouldn’t work on her face, and I am so happy that we were able to get the quirkiness of her reads in the animation.”

Now, as Nee and her team are ready to reap the rewards of over a year and a half of hard work, it’s easy to look back and wonder how they managed to do so much in such a short time.

“I can’t believe that we have a new character in almost every episode—well, 44 new characters in a 52-episode season,” says the show creator. “The show also has a very strong musical quotient, because we have one original and one recurring song by Michelle Lewis and Kay Hanley featured in each episode, They have this great girl pop sound, which will also appeal to the parents. The fact that we were able to do all of these things—all I can say is that I’m glad that nobody was in my head in the beginning!”