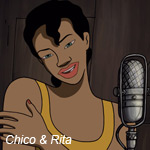 The Oscar-nominated Spanish animated feature about love, life and music will open at the Nuart Theatre in West Los Angeles this Friday, March 9.

Those seeking their next artful animated feature fix should look no further than Fernando Trueba Prod. and Estudio Mariscal’s Chico & Rita—a passionate, celebratory hand-drawn film that weaves music and culture into its tale of love lost and regained, and the devastating highs and lows in between. The film, which recently premiered in Spain and has been on the festival circuit since last year, was crafted by the Barcelona-based team of directors Fernando Trueba, noted artist Javier Mariscal and animation veteran Tono Errando.

Set in the mid 20th century, the film follows a talented young pianist named Chico who lives in Havana, Cuba. When he meets Rita, a beautiful jazz singer, their instant connection sets them both on a twisting romantic path fraught with betrayals, reconciliations and misunderstandings. The easy going world of Havana gives way to the bright lights of Manhattan when Chico follows Rita there. The various settings and emotional upheavals provide ample opportunity for the film to flaunt its skillful animation.

“From the beginning, Fernando Trueba, Mariscal and I wanted to make a film about Cuba,” Errando explains. “Our love for Cuban music, for jazz, for Havana, New York and for passionate love stories … inspired us to do the film and were key to the script and its creation as well.”

Trueba and Mariscal were first introduced 10 years ago when the director commissioned the acclaimed artist to design the poster for his Latin jazz documentary Calle 54. Mariscal has described the meeting as being like discovering a new brother. Their early collaboration led to the inspiration for Chico & Rita when Trueba was blown away by Mariscal’s work on an animated pop promo for a Cuban jazz musician. Errando, who joined the studio to direct the animated series Twipsy back in 1998, is actually Mariscal’s brother, making Chico’s production a tight-knit affair. And the trio’s collaborative skills and passion for storytelling shine through in every aspect of this animated effort.

The differences between the film’s two main locations—Havana and New York—both in culture and aesthetics, as well as the design trends of the time period helped influence the graphic look of the animation. According to Errando, much of the filmmakers’ inspiration was found in the contrasts between the different worlds the characters inhabit as the story progresses.

“The action takes place in the late ’40s and early ’50s. The aesthetics of these years are fascinating,” he elaborates, “American cars, the modernist buildings of Havana, the skyscrapers of New York—the cold light of that city, the warm colors of Havana. Cabarets, luxurious and bright; jazz clubs, dark and brittle. The feminine dresses of the time. The sensuous curves of the Cuban women and the scruffy elegance of the musicians on stage. All this beauty is consistent and has a line that is immensely attractive.”

In addition to studying photographs from that time period, the team also spent time shooting video in Havana. What resulted is an expert line-for-line reproduction of the city; an effect which Errando calls “tailor-made history.”

Chico’s impressive animation, which emerged over three and a half years of intense production, relied on teams from across Europe which totaled up to over 250 animators, artists and clean-up assistants. Seven studios from Hungary, Latvia, Brazil and Spain were able to collaborate thanks to an integrative HoBSoft pipeline. The work completed by the core team at Mariscal could be sent immediately out for clean-up and completion, and Errando praises the technology’s facilitation of the notes and corrections process which can so often be time consuming in an international coproduction.

While the logistics were taken care of, the crew did encounter some challenges to create the unique look and action of the film.

“We chose some of the best animators available, all with lots of experience. But then we had to say, ‘Hey guys, forget everything you’ve done so far … Leave the old techniques behind and begin to animate in a very different, very new way,’” says Errando, explaining that the filmmakers wanted to avoid classic cartoon techniques like squash-and-stretch, exaggerated motion. “Some [artists] reacted well and found it fascinating, but others did not and were very frustrated. For us, it was very hard to tell a great professional, ‘Sorry, this is not what we need.’”

To aide the animators in this different technique, the studio shot the scenes with live actors, whose performances were traced. After months of experimentation, they arrived at a style which combined the richness of the actors’ performance with the poeticism of animation—rendered using Toon Boom’s Harmony.

Errando also notes that the clean-up work was some of the most challenging of the production. As the artwork was done by hand with broad strokes in marker, it took a lot of effort to achieve the clean fluidity of the final version. Thankfully the quality of the work force, the speed and flexibility of the international pipeline and the capabilities of the 2D animation software delivered just what was needed.

One of the key influences of Chico & Rita is the Latin jazz music which brings the two lovers together and drives the action of the film. Trueba recorded musicians in Spain, Cuba and New York who could emulate the sound of the classic stars of the day, and famed Cuban jazz pianist/composer Bebo Valdés (who partially inspired the character of Chico) arranged the score.

“Bebo Valdés has been a huge luxury for the film,” says Errando, “His work as composer, arranger and performer is sublime. We had the privilege of working with one the stars of that golden age of music … Unfortunately for the world, age no longer allows him to continue his prolific and brilliant career. In a way, Chico & Rita is his legacy, and we’ve dedicated the film to him.”

Errando notes that the music of the era may be the most important influence on the film’s style and story—a time when jazz musicians like Charlie Parker and Dizzy Gillespie were exposed to the rhythms of Cuban musicians like Chano Pozo and blended these musical styles into something new and intoxicating.

“Music is central to this film,” he insists, “Jazz in the ‘50s, musicians, their dress, their playing, their movements, the premises in which they played, the fashions of the women who came to the venues in this decade—all that had to be reflected very realistically.”

Two more “characters” in the film are the cities of Havana and New York themselves. As Errando explains, until the U.S.’s embargo against Cuba in 1960, these cities were closely linked by a flow of tourists and professionals—especially musicians—who maintained a rich exchange between these worlds.

“Havana is very colorful, horizontal, warm and very sensual, while New York by contrast is almost monochromatic and very vertical,” Errando muses, “These are two archetypes that define very well the Latin and Anglo-Saxon character. The relaxed and friendly Havana compared to the cosmopolitan and super-efficient Big Apple.”

This union of contrasting personalities is exemplified for Errando by the collaboration between Dizzy Gillespie and percussionist Chano Pozo.

“Chano did not speak a word of English, Dizzy did not know any Spanish, but they understood each other perfectly while playing. They did not need anything else, just the music.”

For the longtime animator, who lists Hayao Miyazaki among his favorite directors, and for his partners Trueba and Mariscal, bringing this story to life in the poetic form of animation has been a dream come true. The ability to artistically interpret history, he says, provide the film with the emotional power they sought. Estudio Mariscal has more animation projects on its plate, which is good news to those fortunate enough to enjoy this triumphal feature effort.

“I think that animation will soon be considered not a genre in itself, but that people will go to a movie and be excited (or not) whether it is done in live action, animation or made with computers,” he shares. “The most important thing is to find so good a story that, every time you tell it to someone, it excites them as much as it excites you.”

Visit www.landmarktheatres.com to purchase tickets and see www.chicoandrita.com for more information about the film.