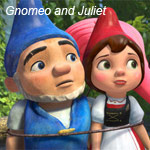 If you didn’t get your fill of Shakespearean garden gnomes with last year’s Gnomeo and Juliet, here’s some good news. Producers Elton John, Steve Hamilton Shaw and David Furnish are working on a sequel to the CG-animated comedy, according to Deadline.com. The original film’s writers Andy Riley and Kevin Cecil are working on the sequel and director Kelly Asbury is attached as creative consultant. John, will once again, write the music for the project. The original Golden Globe-nominated feature made $194 million at the box office internationally.

Tilted Gnomeo and Juliet: Sherlock Gnomes, the sequel adds a new character who is described as “the greatest ornamental detective,’ who sets out to solve the mystery of vanishing gnomes from the suburban gardens of England. Unfortunately, Sherlock is neither as brilliant nor as insightful as his human counterpart, and as the crimes against gnomanity continue, the threat to their world becomes bigger than they ever imagined.

“Action detective stories need some gnomes to liven them up, I’m sure Arthur Conan Doyle would agree,” said Shaw. “It will be a fun, broad family film building on the popular foundation of the first. We believe the wide appeal of our world and characters combined with strong musical elements create a terrific franchise opportunity.”

John’s Rocket Pictures production company is also developing an animated feature from the Michael Buckley novel series Nerds, about kids who run a spy network from their elementary school, which will be adapted and directed by Kelly Asbury.