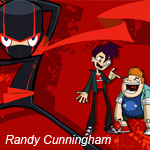 Disney TV’s London-based studio has commissioned Ireland’s Boulder Media and L.A.’s Titmouse to produce a new animated comedy titled Randy Cunningham: Ninth Grade Ninja. Set to premiere on Disney XD in the fall of 2012 and to air in more than 129 countries worldwide, the 52 x 11-minute series follows the fast-paced adventures of unlikely hero Randy Cunningham who, armed with his magic demon fiber suit, the teachings of the ‘Ninja-ing’ (an 800 year old Ninja guide for dummies) and his best buddy, finds himself as the one thing protecting his school and the world from certain destruction.

Dublin-based Boulder Media is handling the series from animation through to post-production and has already hired 50 additional artists and animators to work on the project for its two-year duration. Los Angeles-based studio Titmouse is leading the pre-production creative for the series.

Each 11-minute episode follows Randy Cunningham and his best buddy Howard as they navigate everyday teenage life at high school while taking on monsters and madmen bent on freeing an evil 800 year old Sorcerer imprisoned beneath Norrisville High by the original ninja and guarded ever since by Randy’s predecessors.

“Randy Cunningham: Ninth Grade Ninja is one of an exciting new wave of global Disney XD series,” says Marc Buhaj, senior VP of original programming at Disney Channels, EMEA. “Driven by the team here in London, the series draws on talent from both sides of the Atlantic to help create a world class show. We are thrilled to be working with the outstanding teams at Boulder in Ireland and Titmouse in LA on this project.”