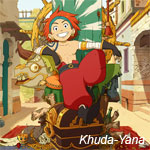 BRB to Screen ‘Khuda-Yana’ at MIPTV

Spanish toon house BRB Internacional will unveil the first episodes of its new series Khuda-Yana at the upcoming edition of MIPTV (April 1-4) in Cannes, France. The company, which celebrates its 40th birthday this year, will unveil a peek at its newest toon, a fun adventure that combines anime aesthetics and western comedy narrative in a story about a petty thief called upon to become the next king of Kosala. The series, consisting of 26 stand-alone episodes, will be aired in open-broadcasting format at the end of this year.

Co-produced by Screen 21 and TVE, Khuda-Yana revolves around a young street pirate who accidentally steals the mystic tulip in King Ravan’s palace, waking up the Blue Girl genie from her long, deep sleep. The genie who is in charge of training the monarchs over the centuries will guide the hero to fulfill his destiny. to his new destiny Aimed at a target audience from 6 to 10 years, Khuda-Yana has a unique epic-comedy tone and was developed with a variety of narrative resources: storytelling techniques, comedy, and even musical scenes inspired by Bollywood movies. BRB will be at Stand R34.13 in the Palais des Festivals in Cannes at MIPTV. For more info, visit www.brb.es.