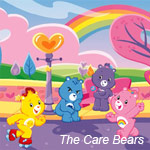 American Greetings Properties, holder of such popular ‘80s toy & toon lines as Transformers, ThunderCats and The Smurfs, is preparing a new television reboot of cuddly favorites The Care Bears just in time for their 30th anniversary, according to Variety. The new animated TV show will target girls 2-7 with updated characters and seek to connect with parents who were fans of the original series.

“The Care Bears are not just a piece of the pop culture fabric, but their messages of caring and sharing are as relevant today as they were when the property was first introduced,” said Gabrielle Oliff, marketing director for American Greetings Properties. “For us, TV is the anchor. We look at every consumer touch-point we can create for the brand. From TV comes DVD, consumer products, publishing and a huge presence online. Entertainment really helps kids learn how to play with the toys.”

Introduced as greeting card characters in 1981, Care Bears have already been reintroduced to fans since 2002 through updated toy designs and direct to video adventures like Care Bears: Journey to Joke-a-Lot, The Care Bears’ Big Wish Movie and Care Bears: Oopsy Does It (thanks to home entertainment partner Lionsgate). More than 8  million DVDs have sold since, with licensed products garnering $2.6 billion worldwide.

AG Properties is introducing its relaunch plans at Toy Fair in New York this week, which will include a new plush line set for 2013 and the home entertainment re-release of 1985’s The Care Bears Movie. The new series will introduce a new Bear to the familiar lineup, with continued home video releases expected to follow.