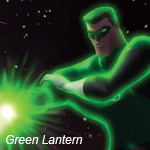 Welcome to the Emerald Knight’s Reboot!

Since the late 1950s, Green Lantern has fought evil in brightest day and in blackest night in the pages of DC Comics, as well as in 2D animated form in everything from the 1970s Saturday-morning classic Super Friends to last summer’s effects-driven live-action movie.

But he’s never fought evil quite like he does in Green Lantern: The Animated Series, the first CG-animated series in Warner Bros. Animation’s long line of DC adaptations. The switch from traditional 2D to a 3D look posed many challenges for producers Jim Krieg and Giancarlo Volpe and executive producer Bruce Timm.

Volpe, a veteran of such series as King of the Hill, Avatar: The Last Airbender and the CG-animated Star Wars: The Clone Wars, heads up animation and had the daunting task of translating Timm’s iconic 2D style to 3D.

“A lot of what makes Bruce’s style work the way it does is it’s very streamlined and economic, and it lends itself to the animation. So we had to really figure out how to pull that off in a 3D space,” says Volpe. Among the techniques used to make that transition was the time-honored animator tradition of playing with toys on the job. “Very early on, we took pictures of the Justice League 12-inch [action] figures and used that as a basis of how to model the characters,” he says.

“One of the challenges of doing this show in CG is that when you’re doing character models, you can’t just do a basic turn and call it a day,” says Volpe. “There’s all of these extra steps that have to be factored in, like how does a character move? Is his body rigged in a flexible way or is it sort of a hard shell? Does the hair have follow through? Is there a texture on the bottom of their foot? We have to think about all of this stuff,” says Volpe.

A lot of this experience was new to Timm, who Volpe said was “reluctantly patient” with a CG animation design process that covered everything down to patterns on the soles of characters’ feet. “He doesn’t prefer to think about it all, but it’s one of the necessary evils we had to do with CG,” Volpe says.

Producer Jim Krieg heads up the writing side of the series, coming onto Green Lantern with credits on Batman: The Brave and the Bold being only the latest in a long career of writing for action cartoons. Like most action series, Green Lantern’s 26-episode debut season will feature macro story arcs that put Hal Jordan in a number of situations that are new to the character.

Eschewing a traditional origin story, Green Lantern starts with Hal and his fellow Green Lantern Kilowog heading to a distant “frontier space” aboard an intelligent ship called Aya to face the encroaching threat of Atrocitus and his Red Lanterns.

One of the reasons for taking the story so far from Oa, home planet and source of power for the entire Green Lantern Corps, was the switch to CG animation. With the comics frequently showing small armies of Green Lanterns fighting battles in space, the expense required to design and create each CG character dictated a different approach that found inspiration in an unlikely place.

The voice cast for the series is full of animation veterans, with Josh Keaton as Hal Jordan, Kevin Michael Richardson as Kilowog, Grey DeLisle as Aya, Tom Kenny as Zilius Zox and Jonathan Adams as Atrocitus.

Doing the animation work on the series is CGCG Inc., a Taiwan-based studio that Volpe had previously tapped to work on Clone Wars. “We actually tested several studios to do the animation for us and CGCG was far and beyond in the lead, so we gave them job,” Volpe says.

In an era of corporate synergy, the executives and editors at DC Comics have helped guide the series and also have found ways for the comics and animated series to play off each other.

“We’ve been weaving in characters in our show that we borrowed or liked from the comic and they’ve also been doing things in the comics that have kind of called back to the show,” says Volpe. “There’s been a few things in recent issues that actually remind us of stuff that’s happened in our episode that the reader won’t realize until months from now.”

As with most animated series, time is a major factor with going CG adding plenty of wrinkles to the production process. “It is such a long process and you have to have such faith in your initial ideas, and hope that they come out on screen when it’s rendered,” says Krieg. “Fortunately for us, it really has.”

Getting a CG show done on a TV timeline and budget is a major challenge for Volpe, who is getting his first shot as showrunner on Green Lantern.

“You have to really steal minutes and an hour—whatever you can—to get everything just right and also learn how to delegate,” he says. “You have to let the crew do their thing and also just steer them at certain points, but let them do the work because you just can’t clone yourself.”

Technology fills in a lot of gaps by allowing for videos and instruction to be easily sent overseas, as have a few key staff additions such as CG animation lead Boola Robello, another Clone Wars alumnus, Volpe says.

Green Lantern: The Animated Series will premiere in early 2012 as part of Cartoon Network’s planned DC Nation block, but viewers were given an advance look in November at the first two episodes. Krieg and Volpe are pleased by the response to the sneak peek, which has been overwhelmingly positive.

“There was a moment when Bruce and I had finished editing the first two episodes, and he looked over at me and high-fived me,” says Volpe. “We were really happy about the end result and I think that we figured that out when we locked the episode, but now we are dying for the rest of populace to see it.”