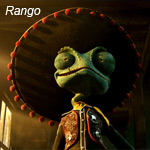 Although Gore Verbinski’s CG-animated movie Rango was one of the early releases of 2011, it’s beginning to pick up a lot of steam in the year-end award season derby. This past weekend, the Los Angeles Critics, the San Francisco Critics group and the Boston Society of Film Critics all selected Rango as the Best Animated Movie of the year. The L.A. Critics also selected Steven Spielberg’s The Adventures of Tintin as the runner-up in the animation category.

To date, the Paramount release has also won the Best Animated Picture award from the Washington D.C. Area Critics Assoc., Teen Choice Awards (best voice actor honor for Johnny Depp), National Board of Review and the Hollywood Film Festival. We may get a better idea of the film’s Oscar chances when the Golden Globes, the Annies and the Producers Guild Awards also announce their picks for best animated feature in the weeks ahead.