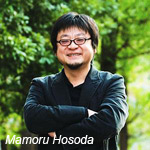 We have more details about popular anime director Mamoru Hosoda’s next movie. The helmer of acclaimed hits Summer Wars and The Girl Who Leapt Through Time is working on Okami Kodomo no Ame to Yuki (The Wolf Children Ame and Yuki). According to a story in the Anime News Network, Hosoda is also co-writing the screenplay with Satoko Okudera. The movie is about a 19-year-old college student named Hana who falls in love and marries a wolf man. Together they raise two wolf kids named Yuki and Ame until the death of the wolf man.

The film is produced by Hosoda’s new anime company Studio Chizu with production company Madhouse and will be released in Japan by Toho in 2012. The characters are designed by Yoshiyuki Sadamoto, while Takaaki Yamashita is overseeing the animation and Hiorshi Ohno heads up the art direction. Seiji Okuda is exec producing the project for NTV.