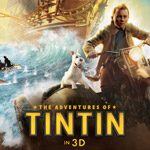 Global sensation Tintin finally arrives in America, thanks to a spectacular movie directed by Steven Spielberg and produced by Peter Jackson.

Spielberg, Jackson, Tintin. Those three names alone are enough to spark the imagination of anyone who has been fortunate enough to read Belgian artist Hergé’s internationally renowned comic books. Ever since it was announced that Steven Spielberg and Peter Jackson were going to join forces to mount an expensive adaptation of the popular series to cinematic life, fans have been counting the days until the film opens in theaters in their town.

The Adventures of Tintin: The Secret of the Unicorn has already made a huge splash in key territories around the world, grossing over $187,600,000 during its first weeks in theaters. Now, industry observers are curious to see how the film, which cost $140 million to make, will perform in the U.S. when Paramount releases it on December 21, in time for the Christmas family rush. When Americans finally get to learn about Hergé’s intrepid boy reporter and his charming Wire Fox Terrier, Snowy (known as Milou in French-speaking countries), it will be the culmination of a journey that began over six years ago.

It’s interesting to learn that Spielberg first learned about Tintin after some French reviewers compared his iconic adventure movie Raiders of the Lost Ark to the work of Belgian artist Hergé, (né Georges Remi, 1907-1983).  He actually reached out to the artist back in 1983 to collaborate on a film adaptation. As it turned out, Hergé was thrilled with the idea of the acclaimed American director taking the helm of a Tintin movie. It’s also nice to know that The Secret of the Unicorn and Red Rakham’s Treasure are two of his favorite adventures.

Years later, when Spielberg and Lord of the Rings helmer Peter Jackson joined forces to launch the possible Tintin trilogy of films, they still thought it would be a live-action feature, which incorporated digital animation to depict the always entertaining Snowy.

How Snowy Showed the Way

“After we saw the great results of the tests that Weta had done for Snowy, we really felt that using digital animation and motion-capture technology was more in keeping with the style of Hergé’s illustrations,” say Spielberg during a phone interview. “We did this live-action test where Peter Jackson posed as Captain Haddock along with a digital version of Snowy. Had we done a live-action adaptation, we would have to move away from Hergé’s caricature style. The only way we could create his exaggerated style without resorting to cosmetic appliances (as they did in Dick Tracy or The Adventures of Baron Munchausen) would be to use motion-capture technology, paired with digital animation. What we have now is really a cousin to Hergé’s own art work.”

Using Weta’s state-of-the-art motion-capture technology, which audiences have become accustomed seeing on-screen—from the days of Gollum in the Lord of the Rings trilogy and the Na’vi from James Cameron’s Avatar—Spielberg was able to experience a freedom of artistic expression rarely found in live-action filmmaking. “I feel that I was very seduced by the art form because I had more control on a daily basis than before,” says the three-time Oscar-winning director. “Movies are representations of who I am as a filmmaker. Sometimes when you’re shooting a live-action film, you want to go back and do it all over again. With this technology, I was able to do it after the first, second, third cut and rework entire sequences all over again.”

The film’s action-packed screenplay is penned by Steve Moffat, Edgar Wright and Joe Cornish and is inspired mainly by two books in the Tintin canon, The Secret of the Unicorn and Red Rakham’s Treasures. Early on it was decided that filmgoers needed to see how Tintin (voiced by Jamie Bell) meets his frequent collaborator Captain Haddock (voiced by Andy Serkis) for the first time. Another decision was to set the period and texture of the film in a noir universe, untouched by period details.

“These stories could take place in the ’30s, the ’50s, the ’80s or now,” notes Spielberg, “and that’s part of their beauty that we wanted to preserve. What we didn’t want in our movie were cell phones, television sets or modern automobiles. Our design cues came first from Hergé, and not from any presumed period or setting.”

According to Jackson, the filmmakers wanted the movie to have the retro, edgy feel of a crime drama, “There’s so much suspense in the story that we felt we could incorporate people with trench coats, hats down in the rain, street lights casting shadows on the wet pavement—that’s the world we’ve created for our Tintin to live in.”

While there have been some discussions about whether it’s right to categorize motion-capture movies as animation, Spielberg firmly believes that The Adventures of Tintin is a bonafide animated project—regardless of the technologies used.

“There is not a single live-action element in the whole movie,” he says. “The only thing on the hard drive is the facial animation of the actors. However every inch, every frame of the movie is animated. For me, motion capture is just a new kind of positive evolution of the process, but it’s certainly co-existent with the kind of animation that DreamWorks and Pixar do. It’s just a different form of animation.”

The animation team at Weta worked on the process of refining, sculpting and detailing each of the film’s 1,240 shots for a year and a half after the actors’ work was done. Then came the rendering process, during which the filmmakers fine tuned visual themes, cinematic moods and added complex lighting effects.

From Gollum to Haddock

“We have been working on this technique for Gollum and King Kong and had the chance to explore full realms of motion capture in Avatar,” says Joe Letteri, the film’s seasoned vfx supervisor. “I think the big difference for us in this movie was tone. We really had to walk that fine line between realism and cartoons. We looked at real-life references and added Hergé’s stylizations, adding a new dimension to the mix, where we could flesh out the whole environment and fly the camera around it.”

Letteri, whose numerous credits includes Jurassic Park, King Kong, Avatar and the Lord of the Rings trilogy and is currently working on Jackson’s The Hobbit, says the toughest nut to crack was Tintin himself. “It all comes down to the characters and whether the can perform,” he opines. “If you look at how Tintin is drawn in the comics, he is very simple. There’s not room to add dimensions. His head is like a little ball. He has no eyelids. When you add eyelids, eyebrows and cheekbones, he suddenly becomes more realistic and you have to stop when he doesn’t look like Tintin anymore. So we had to keep the broad strokes of what Hergé drew and make sure the way he delivers his lines and motions are in line with the character.”

He points out that having talented actors like Serkis, Bell and Daniel Craig (who voices the film’s villain Sakharine) in the mix allows the animation to come to life in a way that would have been almost impossible by other methods.

“An actor’s performance underlying all the animation really gives you continuity throughout the film,” he says. “In traditional animation, that is called ‘keeping the character on model.’ Here, we have the actors who are the ones essentially keeping the character on model. That’s why we like to work with the best actors possible when we’re creating a process like this as it gives us the freedom to expand on those performances and to add a heightened sense of realism, drama, comedy or any other ideas that come up along the way.”

This reliance on the way the thespians portrayed the characters is especially obvious in one of Letteri’s favorite sequences. “I love the scene when Tintin and Haddock meet for the first time,” says the vfx supervisor. “It’s such a crucial scene, because in the book series, it took about 15 to 20 years until they get introduced and it changed the way the comics worked forever. We had to get that in the story, and the way Jamie and Andy play the sequence really worked beautifully.”

Weta used state-of-the-art animation tools to animate human hair (check out Tintin’s unbelievably realistic ginger hair as it blows in the wind), Snowy’s almost-touchable white fur, muscle dynamics, as well as subsurface scattering for human skins. Viewers will also be dazzled by the fantastic CG representations of water in the scene in which Haddock and Tintin are stranded in a stormy sea—courtesy of Weta’s proprietary Synapse system.

The film’s animation supervisor Jamie Beard, who read all the Tintin books as a boy growing up in England, says he was thrilled to work with industry legends Spielberg and Jackson. “It was truly a chance of a lifetime. Tintin was a huge part of my childhood, and it was really exciting for me to explain this amazing world to the Americans I was working with who weren’t as familiar with the characters. “

Beard explains that he and his team had to look at the actors’ performances and ask, “How does that performance fit into the character design?” “We basically start with a rough skeleton over a low-res geometry form of what that character is and from there we go in and refine the motion,” he says. “It all boils down to getting the characters right. When you’re animating a project as extensive as this one, you are always referencing the comic books, and you’re always asking ‘Does it look and feel like Tintin?’”

One of the greatest rewards of working on a film like this for so many years is getting to enjoy the final product with an appreciative audience. “I watched the movie with the rest of the audience at one of the premieres recently,” says Beard. “At the end of that long sea plane crash sequence, everyone clapped. At that point, I felt that we had done the job right and our work had come to fruition.”

Beard also agrees that there shouldn’t be any real distinction between animated films that use motion capture and those that don’t.

“We are taking the same approach and using the same work ethic as all animated movies,” he points out. “We’re just using motion capture as a tool to produce this world dreamed up by Hergé and the actors. We are lucky to use a pipeline that can utilize the work of the actors as a reference point. There are large number of animators that are behind every scene, and of course, Snowy is completely keyframed. It’s just really the evolution of the art form.”

Spielberg also brings up the point that every frame of Tintin has been created with a lot of love and endless hours of craftsmanship and hard work. “I don’t want to play favorites with one scene or sequence,” says the director. “I can say that what I really love about the film is the spirit. I think we were able to capture that spirit which people who grew up with Tintin experienced and made them read these illustrated books over and over again.”

Paramount’s The Adventures of Tintin: The Secret of the Unicorn will open in U.S. theaters on December 21.