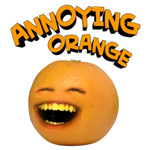 Cartoon Network has acquired the TV rights to the most-watched web series of all-time, The Annoying Orange. Inspired by the viral toon watched by millions on YouTube, a new half-hour television series will premiere in 2012 as part of Cartoon Network’s original programming block.

Created by Dane Boedigheimer and produced by leading entertainment management and production company The Collective, The Annoying Orange features —what else?—an annoying Orange that playfully heckles other fruits, vegetables or nearby objects with puns and jokes. To date, The Annoying Orange Web series has racked up over 850 million total views on its dedicated channel on YouTube as of September 2011, and with new episodes debuting every Friday, it continues to attract millions of views and new fans each week.

The Annoying Orange is the ninth-most-subscribed YouTube channel of all time with more than two million subscribers and has over 10 million fans on Facebook and Twitter. The popularity has also translated over to the official web site, www.annoyingorange.com, which generates nearly four million page views each month.

The television series follows Orange and his band of buddies as they travel through time in a magical fruit cart. From Prehistoric Era to Colonial Times, Orange and the rest of the Kitchen Crew are dropped into random adventures and forced to squeeze their way out. Joining Orange on his escapades are his fellow popular produce pals from the web series including Pear, Passion Fruit, Apple, Marshmallow and his nemesis Grapefruit.

The television series was developed and will be produced by The Collective, which also financed the pilot before shopping it to broadcasters. Dane Boedigheimer co-created the television series with Tom Sheppard (Emmy Award-winning writer for Pinky and the Brain). Conrad Vernon (director of Madagascar 3 and Monsters vs. Aliens) will serve as executive producer for the series along with Gary Binkow and Dan Weinstein of The Collective.

“Two years ago when I launched The Annoying Orange, I never imagined that my unhealthy obsession with talking fruit would become such a phenomenon” said creator Dane Boedigheimer. “I’m really excited to bring a new version to Cartoon Network.”

“We want to continue to ensure that The Annoying Orange’s huge and loyal audience can enjoy the fruits of Dane’s creative vision whenever and wherever they want,” said Michael Green, CEO of The Collective. “Our model at The Collective is to partner with creative artists to build global brands across all possible platforms and we could not be more excited to join forces with the Cartoon Network to extend the magic of this property to cable television.”

The Annoying Orange’s licensed merchandise is being met with strong demand at retail. Leading the way is a line of apparel and accessories that began to roll out in October at JC Penney locations nationwide. The debut toy line from master toy partner The Bridge Direct, Inc. which features a collection of talking plush, clip-ons and collectible figures will hit specialty retailers including Toys “R” Us and RadioShack in time for the holiday gift giving season. The Annoying Orange: Kitchen Carnage app is now available for iPhone and Android.

The Collective is a leading entertainment management and production company. The Collective’s mission is to unlock the value of the direct relationship between artists and their fans by identifying, developing building and maximizing opportunities for creative talent across a multitude of media platforms. Clients include Linkin Park, Counting Crows, Enrique Iglesias, Slash, Alanis Morissette, Godsmack, Martin Lawrence, Emile Hirsch, Jason Isaacs, Eliza Dushku, Eddie Izzard, Lucas Cruikshank a.k.a “Fred” and Dane Boedigheimer. The Collective also finances and produces its own web series, films and television shows including the hit Nickelodeon movies Fred: The Movie and Night of the Living Fred. Based in Beverly Hills, The Collective employs a staff of more than seventy employees.