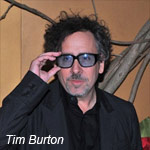 On the heels of sharing his art with visitors to the L.A. County Museum this year, Tim Burton has designed a special float for the annual Macy’s Thanksgiving Parade in New York. The popular director’s creation is a stitched-together balloon boy named B. Boy and is part of the parade’s “Blue Sky Gallery’s” series, which includes works by prominent artists such as Tom Otterness, Jeff Koons, Keith Haring and Takashi Murakami.

In a press release, Burton said, “I’ve always had a fascination with balloons. B. Boy looks forward to his flight through Manhattan on Thanksgiving Day.” According to the noted helmer, B. Boy was stitched together from old birthday party balloons left over from children’s parties that took place on the upper floors of the hospital. With his pointed teeth and uneven stitches, B. was not allowed to play with the children at the hospital. B. withdrew to his basement home and watched his favorite film, The Red Balloon. B. Boy hoped that one day he too would be able to fly above the city and bring joy to one small child.