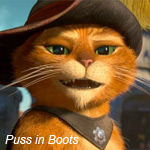 Two toons won the two different box office races this weekend, with DreamWorks Animation’s Puss in Boots topping the domestic rankings and breaking a Halloween weekend record, while The Adventures of Tintin: The Secret of the Unicorn was the top film in the rest of the world.

Puss in Boots took in $34 million in ticket sales its first weekend in release, besting the previous Halloween weekend top mark of $33.6 million posted in 2006 by the horror film Saw III. Puss underperformed to expectations somewhat due to bad weather on the East Coast that hampered moviegoers. Puss earned just slightly more than half its total from 3D showings, and pulled in about 7 percent of its sales from IMAX screenings. Globally, Puss in Boots took in about $15 million in Russia and $2 million in a pair of other markets for a worldwide total of about $51 million.

Adventures of Tintin debuted this week in Europe nearly two months ahead of its U.S. release. Directed by Steven Spielberg and produced by Peter Jackson, the film uses a mocap animation technique in adapting the globally popular comic series. The film expectedly opened very large in France with about $21.5 million in ticket sales. It also was a hit in Belgium, home of Tintin creator Herge, where it took in more than $2 million.

Also in the weekend’s top ten movies was Real Steel, in sixth place domestically with $4.7 million for a $73.9 million total. Its international total has risen to $108 million.

The next major animated release is Happy Feet Two, due out from Warner Bros. on Nov. 18, followed by Sony/Aardman’s Arthur Christmas on Nov. 23, Fox’s Alfred and the Chipmunks: Chipwrecked on Dec. 16, and the U.S. debut of Tintin on Dec. 21.