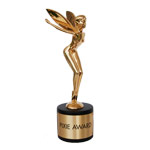 The 3rd Annual Pixie Awards is making animators and FX professionals an “offer too good to refuse”— two free entries in the upcoming awards competition. Sponsored by the American Pixel Academy, the Pixie Awards honor the best in motion graphics, effects and animation.

“We have a very innovative competition, in that we give each entrant scores and judges comments,” says David E. Carter, Pixie Awards founder. “We want to let as many people as possible know about us—so we’re offering two free entries as a way to let people learn more about us, and to build the Pixie Awards brand.”

Creative people who want the two free entries need to email the Pixie Awards and get their entry code number for use in the checkout process. Deadline for entries is October 15, 2011. Works completed since January 1 in the U.S. and Canada are eligible. Entries may be a single work, multiple clips from the same object, or a composite of work from within the same category. Entries are judged on a standard of excellence, not against each other.  Entries scoring 9.0 or higher on a 10-point scale qualify for the Platinum Pixie award. Those scoring 7.0 to 8.9 qualify for the Gold Pixie Award.

You can find more details about the awards at www.pixieawards.com.