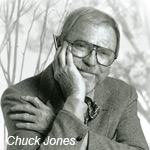 Few animators have been as influential as Chuck Jones, who would have turned 99 years old today.

Jones directed many of the best Looney Tunes and Merrie Melodies shorts for Warner Bros., delivering some of the best takes on great characters like Bugs Bunny, Daffy Duck, the Road Runner and Wile E. Coyote and more.

Among his most famous toons are Duck Amuck, One Froggy Evening, the infamous What’s Opera, Doc?, and the trilogy Rabbit Fire, Rabbit Seasoning and Duck! Rabbit! Duck! The first three of those were inducted into the National Film Registry.

After Warner Bros., he created memorable Tom and Jerry cartoons for MGM and did a number of projects with his own company.

Jones died at age 89 in 2002, but his legacy lives on with his grandson Craig Kausen acting as chairman of the board of trustees of the Chuck Jones Center for Creativity and planning a centennial celebration. You can read more about that here.

To celebrate Jones legacy on this, his 99th birthday, take a look back at his great animated films: