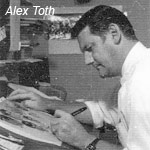 Like politics, animation sometimes makes strange bedfellows, particularly when creative visions and egos are involved. Back in the late 1990s, when I was regularly meeting with Joe Barbera in the hopes of putting a book together for him (one that would never be completed, alas), I heard a lot about that from Joe’s side of the desk, notably his experiences with the legendary comic book artist Alex Toth.

Toth first came to Hanna-Barbera for Jonny Quest and would go on to design characters for such shows as Space Ghost, The Herculoids, and Birdman.  But during his time at the studio, it was not a mutual admiration society.  Joe recalled the difficulties of working with the comic art genius. “Toth was always brooding,” he told me. “I heard he’d go home and get mad and sit on a chair in the middle of a room for two or three days.” But in any duel of creative wills, the unflappable Barbera was always an equal player:

“One day there’s a letter on my desk, a thick letter with a half-inch black border painted on it. I open it up and there’s about seven pages of handwritten lettering…you know, like they do in the comic books? It goes on and on about how nobody in our studio knows what they are doing, how nobody had the faintest idea how to handle whatever it was, just ‘everything stinks.’ But three days later I needed some artwork so I called him up and said, ‘Hey, Alex.’  He said, ‘Joe Barbera…I never thought you’d call me!’ I said, ‘You talking about that letter? You’re entitled to your opinion. Write all the letters you want, but I need three pieces of artwork.’ He said, ‘Oh. When do you need them?’ ‘Thursday.’ So I told him what I wanted and picked it up on Thursday.

“[Another time] he put his head in the door and said, ‘You know, I’m a better director than anybody you’ve got here, I know how to do it.’ I said, ‘Alex, we need you more than you need us. Here are two scripts that need to go into boarding.’ He took the scripts and disappeared. The next morning, they’re back on my desk. All through the scripts were these handwritten notes: ‘Who wrote this shit?…This stinks!…Get rid of them!’  This is helping me? Doug [Wildey] did the same thing. They were brilliant guys, and if it wasn’t for those two guys I never would have gotten Jonny Quest out, but they never understood why I was doing certain things to save costs. They didn’t know that every drawing wasn’t supposed to look like a comic book.”

One last factoid about the Barbera-Toth relationship: Whenever Joe spoke of Alex, or spoke for him, dramatically recreating a decades-old conversation (as Joe was wont to do), he mimed the act of chain-smoking. One can only assume that Alex Toth was the sort of guy who brought the fire with him in all respects.