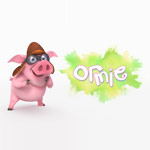 Canadian animation studio Arc Prods (formerly known as Starz Animation Toronto) will be co-producing a new feature with Alcon Entertainment, based on the short Ormie, it was announced Thursday at the Toronto Intl. Film Festival.

“Having worked with Alcon as a client has shown us their extraordinary expertise on both the business and creative sides,” said Steven Hecht, exec VP of business development at Arc.

Directed by Alcon’s Rob Silvestri, Ormie has won several awards at festivals in Savannah, Palm Springs and Seattle as well as New York Children’s Festival. It tells the simple story of a clever pig who is trying to reach the cookies on top of the refrigerator.

Arc was responsible for the animation of  this year’s Disney-released Gnomeo and Juliet and Focus Features’ 9 and has also provided vfx for Starz’s Camelot series. Silvestri worked as an animator on Gnomeo and Juliet, 9  and The Pirates Who Don’t Do Anything. He is also directing Alcon’s upcoming feature OZ3D, a contemporary adaptation of L. Frank Baum’s The Wizard of Oz.

You can see the Ormie short here: