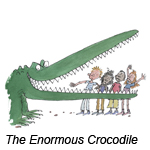 Adastra Creative and the literary estate of world-renowned author Roald Dahl have joined forces to produce the first ever animated television series based on a Dahl title.

Developed from the best-selling children’s book The Enormous Crocodile, the television series will be faithful to Dahl’s unique style of storytelling and the distinctive illustrations of his principal illustrator, Quentin Blake.

Brand new stories will chart the further adventures of the hopeless Enormous Crocodile whose “secret plans and clever tricks” are humorously thwarted by the animals in the jungle: Humpy Rumpy, Mugglewump, Trunky and the Roly Poly Bird.

Adastra will develop and produce the series of 52 11-minutes episodes. Mellie Buse and Jan Page of Adastra, the creators of the award-winning pre-school comedy success Grandpa in my Pocket, will write the project.

“We were overjoyed when Roald Dahl’s literary estate contacted us with the idea of turning this timeless classic into an animated series,” says Buse. “The Enormous Crocodile is a much-loved character and Roald Dahl books are at an all-time high. In 2010, a Roald Dahl book was sold every 5 seconds day or night. His work is currently published in 49 languages so we are sure a television version will have huge international appeal.”

Adastra is in discussions with U.K. broadcasters and is keen to talk to further potential U.K. and international partners.