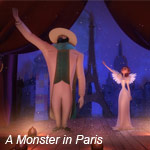 A Fin-de-Siècle Fantasy: ‘A Monster in Paris’

DreamWorks veteran Bibo Bergeron goes back to his French roots with A Monster in Paris, an elegant CG-animated feature set in 1910.

French director Bibo Bergeron has directed two very different DreamWorks animated features (The Road to El Dorado and Shark Tale) and worked as character designer on the studio’s Jerry Seinfeld vehicle, Bee Movie. However, although he had made Los Angeles his home, he still missed Paris. That’s when he began dreaming of making an animated movie with a very distinct French flavor.

“I was in L.A. for years and a little homesick,” Bergeron tells us. “I wanted to write something set in my home city, Paris. In addition to that, I’ve always loved the turn-of-the-20th century when arts, science, technology innovations were moving ahead at full speed. Altogether, I wanted to make a fun, romantic and musical movie.”

Bergeron got a chance to realize his vision in 2005 when he joined forces with screenwriter Stéphane Kazandjian. From the beginning, there were a few things that were very important to him: He wanted the film to look differently from other CG-animated features he had worked on and to make sure it was an artist-driven project. Bergeron also felt strongly about the plotline having something to do with a theatrical stage.

Audiences in France will be able to enjoy the fruits of his labor on October 12 when the 3-D, CG-animated A Monster in Paris (Un Monstre à Paris) premieres in theaters in their country. Set in Paris, circa 1910, the movie tells the story of a shy movie projectionist and a clever inventor who set out to capture a monster that is terrorizing their city. The monster, in turn, is in love with a beautiful cabaret singer (voiced by Johnny Depp’s real-life wife, singer/actress Vanessa Paradis). The English voice cast includes Catherine O’Hara, Danny Huston, Adam Goldberg and Bob Balaban. Film veteran Luc Besson (Arthur and the Invisibles, The Fifth Element) is the producer of the 28 million euro (about $40.3 million) picture, which was animated by Bergeron’s own Nice-based Bibo Films, and produced by Europa Corp, uFilm and France 3 Cinema.

Bergeron says he didn’t start out to make the movie in CG, but he was simply looking for a way to translate the “artist paintbrush strokes on the screen.” He adds, “I love all techniques—and for me, it was more important to have a great story first.”

The ambitious project has had its share of challenges. The production had to shut down a couple of years ago on account of financial issues that had to be resolved between the producers. Bergeron says artistically, designing the lead monster in the movie (Francoeur) was the toughest aspect of the process. “It’s really hard to create a character who resembles an oversized bug, but is also a lost soul,” he explains. “He has to look a little frightening at first, but the audience must feel compassion and sympathy for him. We spent many long weeks to find the final look for him.”

When asked to compare the production of Monster to his other Hollywood-based project, Bergeron is refreshingly honest.

“It’s very different when you are working on such a personal film and the project is your baby,” he explains. “I had the chance to put together a film with every ingredient I like and chose. When you work in a big Hollywood studio, the main decisions were not only mine, which is OK. Here, I was the director and the auteur, and that notion is ‘sacred’ in Europe. I had more freedom—which meant more responsibilities, too. But I will never regret my experience at DreamWorks. I learned so much over there, with so many talented people in every department. That experience helped me a lot on this movie.”

Offering a layered story told through memorable visuals, A Monster in Paris has been inspired and influenced by a wide variety of artistic sources. Bergeron points out that both he and production designer François Moret are fans of the atmosphere, lighting and mood of paintings by Gustave Caillebotte and Alfred Sisley. “The city of Paris is by itself a great source of inspiration in so many aspects,” he adds. “For the animation, I didn’t want something too rubbery/cartoon and I wasn’t going for puppetry either—something right between the two styles—It had to be expressive, with strong poses, to match the theatrical/stagy feel of the backgrounds.”

Bergeron counts the late Belgian comic-book artist André Franquin (Gaston, Marsupilami) as one of his major influences, but it was a classic Disney movie that really put him on the right path. “I always loved animation when I was a kid, but  when I was about 17 and in art school, I went to see a re-release of Peter Pan in a Parisian theater and it knocked me over the head. I just realized that the film was a series of fantastic drawings of characters that were breathing, talking, singing and having emotions. I said to myself: ‘That’s it, I want to do that!’ I stayed on my seat for the following screening trying to understand how that was possible.” A few months later, Bergeron enrolled at the famous Gobelins animation school.

He also points to beloved classics such as The Jungle Book, The Sword in Stone, Pinocchio, Tex Avery and Chuck Jones cartoons, The Thief and The Cobbler (the Richard Williams version), My Neighbor Totoro, Akira, The Nightmare Before Christmas, Toy Story, The Incredibles, How to Train Your Dragon and TV shows such as Ren & Stimpy, SpongeBob SquarePants and The Simpsons as important achievements that have informed his work.

Now that the film is finally ready for moviegoers to enjoy, the animation veteran says he is very proud of his team’s dedication and hard work through the long production period. “I’m also pleased when people say that it’s a feel-good movie, and that it’s elegant and has strong characters.”

Despite all the hard work that went into putting his Monster on the screen, the director shows no signs of slowing down and relaxing. He is already thinking of a sequel and is writing a live-action fantasy script about a liberated 19th century actress. He has also penned an outline for another stereoscopic CG-animated movie. Bergeron, who also produced Fabrice Joubert’s 2009 Oscar-nominated short French Roast, says it’s crucial to study and get inspired by everything around you. He notes, “In order to succeed, you have to be hungry for animation, but you also have to immerse yourself in movies, paintings, photos, dance shows, plays, everything.” Now those are truly valuable words of advice from a French master who is not afraid of taking risks and reaching for higher ground.

A Monster in Paris opens in France on October 12. Eurocorps plans to secure a U.S. distributor for the film in 2012.