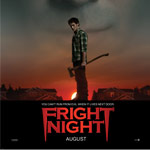 The Return of ‘Fright Night,’ Conan’ and ‘Spy Kids’

While there are no animated features debuting in theaters this weekend, there are plenty of CG-laden summer thrills to go around that will spell competition for returning titles such as The Smurfs, Cars 2 and Rise of the Planet of the Apes.

For starters, we have the remake of the awesome 1985 feature Fright Night, directed by Craig Gillespie, which stars Colin Farrell as the cunning vampire next door, Anton Yelchin, Toni Collette and David Tennant (Dr. Who). This perfect summer movie was a hit at Comic-Con and has been getting good reviews from the national press. Digital Domain, Entity FX, Eden FX and The Third Floor provide the film’s visual effects and pre-viz.

Also opening this Friday is the new 3-D stereoscopic Conan the Barbarian with newcomer Jason Momoa in the role made famous by Arnold Schwarzennegger  appealing to the action-adventure fans. The sword-and-sorcery pic also stars Rose McGowan and Ron Perlman and features some cool CG effects, courtesy of Dr. Picture Studios, BOT, Crazy Horse VFX and previz courtesy of The Third Floor.

Robert Rodriguez brings back his popular Spy Kids franchise with a twist this Friday—the fourth outing is in Smell-o-Vision, meaning filmgoers are given a numbered card (Aroma-Scope) so that they scratch and sniff the aromas of the film! Jessica Alba, Jeremy Piven, Joel McHale, Mason Cook, are all part of The Spy Kids: All the Time in the World in 4D as are original kids Alexa Vega and Daryl Sabara. Ricky Gervais also provides the voices of their guard dog Argonaut. Hybride Technologies and Speedshape worked on the film’s vfx.