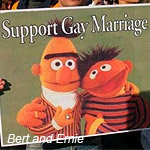 In response to an online petition on change.org urging Sesame Street puppets Bert and Ernie to marry, the org has issued a statement noting that the two popular characters are just friends.

In a statement released to The Hollywood Reporter, Sesame St. Workshop pointed out:

“Bert and Ernie are best friends. They were created to teach preschoolers that people can be good friends with those who are very different from themselves. Even though they are identified as male characters and possess many human traits and characteristics (as most Sesame Street Muppets do), they remain puppets, and do not have a sexual orientation.”

The petition’s Facebook page notes that if the show depicts gay marriage tastefully, it would help put an end to bullying and suicides of LGBT youth “Sesame Street should recognize that there are LGBT relationships, families, and include them in their show,” it said. Petitioners say the time is now right to add homosexuality to that list.

The Washington Post’s Jonathan Capehart added, “Children look for reflections of themselves in the world around them. If a gay kid takes a gander at Bert and Ernie and feels a pang of familiarity, that’s great. Whether the fuzzy fellas get married or not, at least that gay kid will be seeing a positive image that will bolster his budding self-image. And there’s no harm in that.”

Over the years, SpongeBob SquarePants, Peppermint Patty (Peanuts), Velma (Scooby-Doo), Tinky Winky (The Teletubbies) and Snagglepuss are some of the other animated characters and puppets that have been the subject of similar rumors regarding their sexuality. Last year, Archie Comics introduced its first gay character. In June, New York became the largest state to legalize same-sex marriage.