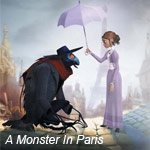 New Trailer for ‘A Monster In Paris’ Arrives

The new English-language version trailer for Bibo Bergeron’s 3-D, CG-animated feature A Monster In Paris (Un Monstre a Paris) has arrived on YouTube. The pic, which will be released on October 12 in France, is set in Paris, circa 1910 and tells the story of a shy movie projectionist and a clever inventor who set out to capture a monster that is terrorizing the city. The monster, in turn, is in love with a beautiful cabaret singer (voiced by Johnny Depp’s real-life wife singer/actress Vanessa Paradis).

The English voice cast includes Catherine O’Hara, Danny Huston, Adam Goldberg and Bob Balaban. Luc Besson (Arthur and the Invisibles, The Fifth Element) is producing the 25 million euro-budgeted project. The movie will debut at the Toronto International Film Festival in September. Don’t forget to pick up next month’s issue of Animation Magazine for an in-depth interview with Bergeron about his new movie.