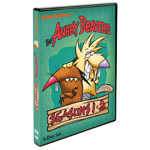 New DVD Rush: Tom and Jerry and The Angry Beavers

The Angry Beavers: Season 1 and 2. Shout! Factory continues its mission to release popular Nick Toons from the past on DVD this week by releasing the first two seasons of Mitch Schauer’s clever show. The series, which ran from 1997 to 2001, charted the adventures of twin brother beavers Norbert and Daggert and their critter neighbors in the Wayouttatown forest. The four-disc set contains 26 episodes of semi-aquatic rodent antics, including “Bummer of Love,” “Fancy Prance” and “If You In-Sisters” and the Halloween special “The Day the Earth Got Really Screwed Up!” featuring the voice of the late, great Peter Graves. All of this and more can be yours for about $29.93.

Tom and Jerry & The Wizard of Oz. (Warner Bros., $19.98). What? Did you seriously think that the popular cat and mouse never had the chance to visit Dorothy and Toto in L. Frank Baum’s magical world? In this beautifully animated (and quite faithful to the 1939 musical) mash-up, everything stays in the MGM family, the great voices are provided by the likes of Grey Delisle, Laraine Newman, Rob Paulsen and Michael Gough…and Spike Brandt and Tony Cervone are the talented directors.