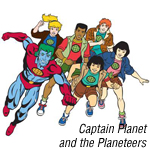 Murphy and Angry Filmworks were instrumental in bringing the Transformers movies to the big screen, and Murphy and Montford  produced the upcoming Hugh Jackman blockbuster Real Steel with Steven Spielberg. The company also was involved in making Shoot ‘Em Up (2007), The League of Extraordinary Gentlemen (2003), Apt Pupil (1998) and Natural Born Killers (1994).

“We are extremely excited about bringing the good Captain back to life,” said Murphy. “His adventures are known worldwide and he is recognized across generations. We expect to make a spectacular series of films with the amazing team at Cartoon Network.”

Captain Planet and the Planeteers premiered in fall 1990, airing domestically and internationally in syndication and on cable networks TBS and TNT. Six full seasons of the series were produced in the original run of the series.