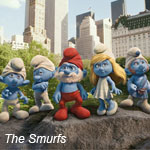 Smurfs and the City – ‘The Smurfs’ in 3D

It’s been 53 years since Belgian artist Pierre “Peyo” Culliford came up with the idea of a pastoral village inhabited by The Smurfs (or Les Schtroumpfs as they are called in French) who were only three apples tall and lived in harmony despite the evil schemes of their enemy Gargamel and his cat Azrael.

This summer, movie audiences all over the world are treated to a whole new incarnation of Papa Smurf, Smurfette and the rest of the gang in Sony’s big 3-D feature, which takes our beloved protagonists to a live-action, modern-day New York City of all places. Directed by Raja Gosnell, who has made a solid career out of blending live action with CG-animated characters in movies such as Scooby Doo, Scooby Doo 2 and Beverly Hills Chihuahua, the film has had quite a fascinating development history. But, as producer Jordan Kerner tells us, staying true to Peyo’s original ideas and creations was always the top priority for the creative team.

We wanted the Smurfs to be living, breathing, caring and funny creatures just as Peyo intended them to be,” says Kerner, who has produced numerous charming family features throughout his career, including Inspector Gadget, George of the Jungle and Charlotte’s Web. “Peyo’s daughter Veronique was with us as we created each character and through every shot of the film. She was involved with this production, and she verified the fact that he always had it in his heart that someday he would like to see The Smurfs interpreted in a live-action manner.

High on Gosnell’s list of priorities for the film was getting the right balance between the humorous parts and the emotional scenes—and making sure the little guys were the right shade of blue and were as realistic as possible, without losing their cartoon-y feel. “We wanted to be invested in the emotional moods,” he says.

We studied Avatar [another movie featuring a blue cast of characters] and learned a lot about exploring the 3D format without being gimmicky.

Kerner brings up the fact that in the beginning, both he and Gosnell were against going the CG animation route, even exploring the possibility of using miniatures in the first part of the movie, which is set in the enchanting Smurfs Village. “Sony, however, was encouraging us to go full 3-D and incorporate CG animation,” says the producer. “Our goal was to enhance the emotions. And of course, now we are really pleased with the final results.”

While some Smurf traditionalists have objected to taking the characters out of their medieval setting, Kerner and Gosnell believe the hustle and bustle of the Big Apple provided a great contrast to the classic cast. “I think we all enjoy seeing a living, breathing CG-animated Smurf riding a cab through New York City or causing trouble at the big FAO Schwarz store,” note Kerner. “The wish fulfillment factor is all about wanting to see a Smurf in your kitchen or hanging out on the fire escape of your building. We knew we were going to get some pushback, but we believe that when kids see the movie, they’re going to say, ‘Wow, there are Smurfs in our world!’“

Of course, we all know that the Smurfs appeal to fans of all ages, and the script by J. David Stern & David N. Weiss and Jay Scherick & David Ronn, makes sure that there are plenty of self-referential moments of humor—especially the subversive deeds of the evil Gargamel (Hank Azaria)—for life-long fans, who grew up with the show on TV during the ‘80s. Kerner believes that the central story involving Neil Patrick Harris’ character coming to terms with being a father and his relationship with Papa Smurf proves to be one of the key emotional peaks of the project. “It’s poignant and real, and definitely not treacly,” he notes.

Gosnell, who has worked on a good number of live-action and animation hybrid movies, says The Smurfs was a departure from his previous efforts in the genres because the CG-animated characters were not only there for comic relief—they were the heart and soul of the story. “The gravitas is on the Smurfs and the nuances of their performances, and the live-action actors needed to act against these characters that aren’t really there, and they’re talking to a thin wire put in for placement purposes.”

The CG characters needed to feel like Smurfs, but they also had to be realistic enough to be filmed right next to Harris and the other cast members,” says Saliba, whose credits include Aladdin, Monster House, G-Force and Stuart Little 2. “We did experiment with hyper-realism at first, but they got creepy pretty quickly—there’s a fine line between creating cartoon-y characters and having them look like Gollum from Lord of the Rings. We finally landed in a place where we had real, tangible characters that were also unmistakably Smurfs.

Saliba also notes that coming up with the right details such as creating the correct skin texture, pores, freckles and peach fuzz, or rigging the skin the right way so that it reacts correctly with the eyelids and the eyelashes involved lots of back and fort between modelers, riggers and animators. “Raja was interested in putting the performances in the hands of the artists,” he says. “So we were really building them from the ground up, and it was a little bit more old school, just like we had done in Stuart Little. We really didn’t want to go the motion capture route, because these characters were not human and they had crazy proportions, so it was better to keyframe them. We did use video reference of the voice actors, which proved to be a gold mine for picking up their mannerisms.”

The veteran animation supervisor tells us that he has two favorite scenes in the movie—one involves the Smurf characters playing Rock Band and the other is an emotional exchange between Papa Smurf and Neil Patrick Harris’s character. “Papa is on the roof and he’s trying to conjure up a blue moon and Patrick comes to him and talks about the challenges of being a father,” he explains. “It’s a real honest man-to-man moment, just two characters having a subtle moment, and one of them is fully CG animated.”

Also bringing their special expertise to the film was the team at Tippett Studio, who worked on Gargamel’s arrival sequence and did a superb job of bringing his evil cat to life. Under the direction of vfx supervisor Blair Clark and co-supervisor Scott Liedtka, they created a digital cat to match the four real-life animals that played the part of Azrael (using Maya, shallowPaint, Photoshop, Nuke, Jet, Houdini and RenderMan). “Azrael is the best looking cat Tippett Studio has done,” says Liedtka.

After all is said and done, the creative team hopes that once the 2D purists take a look at the final product, they will agree that despite its modern setting, CG technology and 3-D medium, the movie will be remembered for its loyalty to Peyo’s creative spirit. “We offer no apologies to animation purists, but Raj and I carry Peyo’s vision in our hearts,” says Kerner. “When you are adapting a work of someone that cared so much about his creations, you have to hold it closely in your heart.” And that’s a sentiment that is always true, whether you live deep inside an enchanted Smurf Village or amidst the crazy hustle and bustle of New York City.

Columbia/Sony Pictures Animation’s The Smurfs is playing in theaters nationwide.