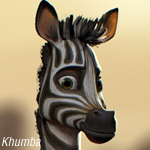 The story of a half-striped zebra who embarks on a quest for his missing stripes was originally written by South African writers Raffaella Delle Donne and Anthony Silverston. The writing duo was recently in Los Angeles to record some of the cast and to discuss the script with Roberts.

“For better or worse, The Lion King has cast a pretty long shadow and with Khumba I learned how tricky it can be try to present a fresh animated fable – set on the African plains, populated by African animals,” Roberts says. “But by focusing on all the distinct and original elements in the story, we could let Khumba shine in its own, well-earned light.

The screenplay for Zambezia, Triggerfish’s first film due to be released later this year, was given a final polish by U.S. writers Cory and Todd Edwards, the creators behind Hoodwinked!