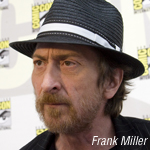 They may not get all the press that Hollywood does, but there are still comic books and comic book projects making news at Comic-Con International: San Diego.

Up first is a new graphic novel from superstar artist and writer Frank Miller.

Titled Holy Terror, the book follows a masked hero named The Fixer, who hunts down the perpetrator of a terrorist attack. Due out in September from Legendary Comics, the new comics publishing arm of Legendary Pictures, the book is being promoted with a video trailer.

Holy Terror has been in the works for nearly a decade and began life as a story in which Batman went after Osama bin Laden.

This is Miller’s first new comics project since he wrote and directed the feature film The Spirit, which flopped at the box office. He also co-directed with Robert Rodriguez an adaptation of his own Sin City comics, and created the comic 300, which inspired the Zack Snyder film. In comics, Miller is best known for his work on Daredevil for Marvel, Batman for DC Comics and his own projects such as Sin City, Hard Boiled (with Geoff Darrow) and the Martha Washington saga (with Dave Gibbons).

Meanwhile, at the ICV2 Comic, Digital and Media Conference, a white paper was released reporting graphic novel sales rose 3 percent so far this year, while sales of periodical comic books were down 8 percent, reports PW.com. Overall, the market was down 2 percent.

Generating the most interest — and least reliable figures — is the burgeoning market for digital comics, which was reported to have doubled since 2010. The size of that market is tougher to estimate, with the report placing it at between $6 million and $18 million.