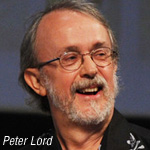 Besides roaming the San Diego convention hall and gaping at the spandex-wearing masses, Comic-Con attendees get the chance to get an early peek at some of the most anticipated animated and vfx-driven features and TV series. On Thursday, toon fans were treated to a wonderful panel featuring Aardman Animation Studio founder Peter Lord and writer Peter Baynham who offered details and clips from the two big Sony studio features, Arthur Christmas (Nov. 23) and The Pirates! Band of Misfits (2012).

Moderated by Comic-Con fixture Ralph Garman, the panel kicked off with the newly released trailer for The Pirates! 3D. Lord talked about how much he enjoys working in stop-motion animation, despite the fact that everyone talks about how slow the process is. He said he thinks it’s much more fun than computer animation. The inspiration for the new movie, which features the voices of Hugh Grant, David Tenant, Salma Hayek, Jeremy Piven and Imelda Staunton (as the pirate-hating Queen Victoria) was classic pirates movies. “We looked back at the great pirate movies of the past—the classic era—and then we just had ridiculous fun with the whole thing,” Lord said. “It’s not like a conventional pirate movie. It’s a bit out there.”

Lord noted that the film centers on a cheerful, optimistic captain (Hugh Grant) who loves being a pirate and hopes to win the “Pirate of the Year Award.” When he goes into town for the award, he encounters his nemesis Black Belamy (Piven) who wins the award every year. The pirates go sailing in an attempt to get booty by attacking ships (where they encounter everything from Lepers to schoolchildren). On the last ship the pirates try to take for booty they encounter Charles Darwin (David Tenant). Darwin takes the pirates to London where they meet the main villain of the film, Queen Victoria.

Lord then introduced Arthur Christmas, the CG-animated holiday Sony feature which is directed by Sarah Smith (TV’s I Am Not an Animal, The League of Gentleman) written by Peter Baynham (Borat). In this re-imagining of the Santa Claus story from the p.o.v of his son, Arthur (voiced by James McAvoy) Christmas is a secret-agents-type affair with elves leading the hush-hush gift-delivery opration. “We’ve really done all the maths and we’ve worked out exactly how Christmas operates,” noted Baynham. “I got the idea for Arthur Christmas about six years ago, just due to that simple nagging question of: how does Santa do it?” Baynham added that Santa’s sled looks more like the starship Enterprise than a classic wooden vehicle. There’s also a mission control where Santa’s elves help his army around the world work to ensure that everyone receives their holiday gifts. In this offbeat world, elves have different duties and wear differing plainclothes instead of their customary green outfits.

Jim Broadbent voices Santa, Bill Nighy is Grandsanta, Hugh Laurie is Steve, next in line to take over and Imelda Staunton voices Mrs. Santa. The trailer for the film whetted appetite for Arthur Christmas which seems to continue the Aardman tradition of offering excellent animated fare that doesn’t insult the intelligence of audiences all over the world.

You can check out the trailers for these two eagerly anticipated features here: