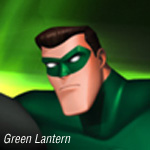 Having made it to the bigscreen, Green Lantern is coming to Cartoon Network this fall.

The series, which has Bruce Timm and Sam Register on board as executive producers, is set to debut in September. The series takes the classic Timm/DC style into the CG-animation realm, as can be seen in the new trailer for the series:

Green Lantern: The Animated Series is set to debut with the first of 26 first-season episodes on Cartoon Network on Sept. 5.