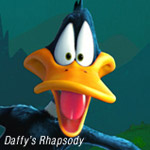 The Looney Tunes are coming back to the big screen in three new shorts that will arrives starting this year and featuring the voice of the beloved late voice actor, Mel Blanc.

The new shorts will be stereoscopic 3D theatrical cartoons produced by Warner Bros. Animation and directed by Matthew O’Callaghan.  Two of the CG-animated shorts will feature original songs recorded in character in the 1950s by Blanc, who voiced almost all the classic Looney Tunes characters during a career that spanned six decades prior to his death in 1989.

Here’s how the studio describes the shorts:

The shorts were announced by Warner Bros. executives at the Annecy International Animated Film Festival.

“Everyone at Warner Bros. Animation grew up loving the Looney Tunes characters, and it has been both a great honor and an enormous challenge to continue the legacy of these animation icons and introduce them to a new generation of fans,” said Register, Executive Vice President, Creative Affairs, Warner Bros. Animation. “And to have the incomparable Mel Blanc voicing these characters once more is nothing short of a dream come true for all of us.”