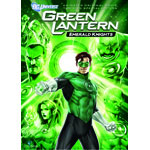 Green Lantern is getting animated just ahead of his big-screen live-action debut, with the release on home video of a new animated feature film.

Bonus features on the combo pack edition include a sneak peek at the upcoming Batman: Year One, a behind-the-scenes look at All-Star Superman, featurettes “Only the Bravest: Tales of The Green Lantern Corps” and “Why Green Lantern Matters: The Talent of Geoff Johns,” audio commentary from Johns and DC Comics executive editor Dan DiDio, a digital comic book, bonus animated TV series and more.