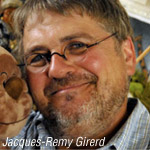 Girerd, whose 2009 feature Mia and the Migoo had its U.S. release only two months ago, told the press at the recent Annecy Festival that his new feature will be an offbeat comedy that focuses on two separated sisters and the genetic manipulation of plants. The pic’s visual style takes cues from the works of Ronald Searle, Ralph Steadman and French cartoonist Jean-Jacques Sempe.

Animation production, which will be mainly handled by Valence-based studio Folimage, will begin at the end of June, and the film will be released in May 2013. Melusine will co-produce the comedy.

According to Girerad, Aunt Hilda! will be his final film as helmer.

Girerd also noted that Alain Gagnol (A Cat in Paris) is wrapping the script for his next movie Phantom Boy, which will be co-directed by Gagnol and Jean-Loup Felicioli. New York-based GKids, which distributed Mia and the Migoo, will also release A Cat in Paris later this year in the U.S.

Released as Une Vie de Chat in France, the beautifully animated 2D pic follows the double life of a cat named Dino which lives with a young girl and her mother during the day, but helps out a burglar with a heart of gold at night. You can read more about A Cat in Paris at https://www.animationmagazine.net/features/a-superbe-year-for-french-animation/.

And here is the trailer for A Cat in Paris: