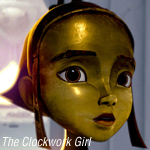 The popular graphic novel The Clockwork Girl is coming back to print and prepping an animated 3D feature film for the fall.

Created by Sean O’Reilly and Kevin Hanna, Clockwork Girl tells the tale of Tesla, a girl robot who befriends a mutant circus boy despite their families’ feud and explore the world together.

The comic was first released by Arcana Studios in 2006 with six issues in all published and later collected into a single hardcover volume. The book won the Moonbeam Award, as well as the Graphic Novel of the Year Award at Book Expo America by ForeWord magazine. Having sold more than 340,000 copies worldwide, the book is coming back to print this summer as a hardcover from Harper Design. A softcover edition will follow in autumn to tie in to the planned release of the film.

The film is being produced at Luximation Films in Canada, and features the voices of Alexa Vega as Tesla, Jesse McCartney, Brad Garrett, Jeffrey Tambor and Carrie Anne Moss. Hanna is directing the film, with O’Reilly as producer.

Here’s a look at a short preview for the film posted last year: