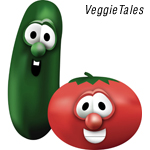 The deal calls for Huhu to produce six direct-to-video VeggieTales projects, with the studion responsible for everything from pre-production, animation and postproduction.

“It would be an understatement to say our talented team of artists here at Huhu are excited about this opportunity; to work alongside Big Idea is a dream come true,” said Trevor Yaxley, founder and CEO of Huhu. “The other principals at our studios, David Pitts, Bill Boyce and Henry Wong, are also more than delighted to once again be associated with Big Idea Entertainment.”

“We’re pleased to partner with the talented and creative team at HuHu Studios,” said Leslie Ferrell, general manager for Big Idea Entertainment. “We’re confident the six new direct-to-video productions will continue to bring the timeless and delightful stories, lessons, and songs that fans around the world love, into their homes.”