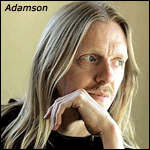 Adamson on Board for Dark Horse’s ‘Beasts of Burden’

DreamWorks Animation alumnus Andrew Adamson is set to adapt the Dark Horse Comics series Beasts of Burden into a CG-animated feature film, according to The Hollywood Reporter.

Adamson is set to produce under his Strange Weather Films company with partner Aron Warner and Mike Richardson of Dark Horse Entertainment.

Reel FX is set to do the animation for the film.

The movie will adapt the comic, created by Evan Dorkin and Jill Thompson, about a gang of dogs and one cat that to team up in order to keep their owners and the town’s residents safe from supernatural threats. The comic first appeared as a four-issues series in 2009, followed by a collected edition and a one-shot crossover with Hellboy in 2010.

In addition to creating such comic-book characters as Milk & Cheese, Dorkin has worked in animation mostly as a writer on such series as Space Ghost: Coast to Coast, Superman and Batman Beyond. He also designed characters for Yo Gabba Gabba!

Thompson’s credits include art for such comic books as Sandman and The Invisibles, as well as her own Scary Godmother, which was adapted into a pair of animated TV movies.

Dark Horse Entertainment’s Keith Goldberg is an executive producer, with Jeff Fierson of Strange Weather as a co-producer. Jared Mass will supervise the project for Reel FX.