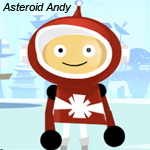 Out of the Blue Puts ‘Asteroid Andy’ in Orbit

Hallmark Properties web series Asteroid Andy is being developed into an animated TV series by Out of the Blue Enterprises, producer of PBS Kids’ preschool show Super Why.

The half-hour animated comedy targets six- to 11-year-old boys and will revolve around a boy who lives in the future with his family and his collection of intergalactic pals.

The Asteroid Andy characters, storylines, visuals and voice were created by Hallmark veteran Peter Martin who is also behind the property’s website. Out of the Blue is headed by former Nick execs Samantha Freeman and Angela C. Santomero, who is also the creator of Blue’s Clues.

Here’s a clip from the original web series: