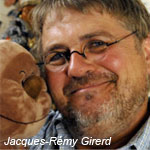 This month, French animator Jacques-Remy Girerd’s traditionally animated feature Mia and the Migoo (produced by Folimage and distributed by GKids) opens in theaters across the U.S. Aimed at young viewers, the ecologically themed movie features the voice talents of Whoopi Goldberg, Wallace Shawn, Matthew Modine and James Woods. We thought it was a great time to catch up with the prolific director, whose output over the years has included wonderful films such as Raining Cats and Frogs and the recent film A Cat in Paris (Une Vie de Chat):

Animag: Please tell us a little bit about the genesis of the project. How did it come together?

Jacques-Rémy Girerd: I wanted to make a road film. And I also had in mind two main characters: a small, diminutive girl, barefoot, but with a potent character and lots of courage, and a fantastic character with vast powers, the Migoo, capable of doubling himself and becoming a giant, but who also can lose everything at any moment.  It’s from this contrasted couple that I created this incredible story. 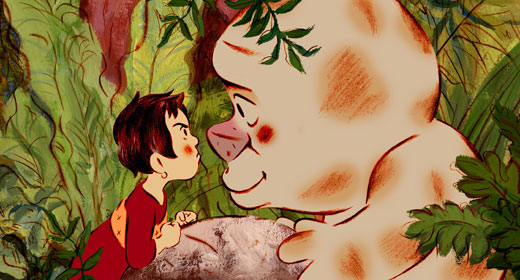 When did you start working on the movie and how did it take from start to finish?

I started writing on the project shortly before the release of Raining Cats and Frogs, in 2002. The work on the film lasted six years, from beginning to end. Two years of writing, including storyboards and developing the look of the film, three years of animating and a year of polishing and final preparation. It was a very long effort, because all the drawings were made by hand. 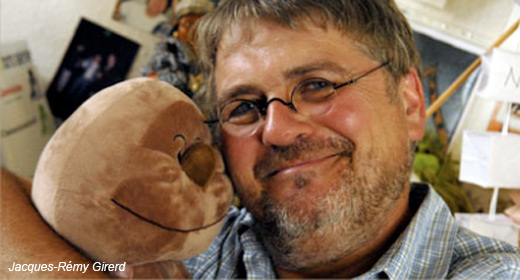 What was the budget for your movie?

About $10 million U.S. dollars.  It is a French budget, not comparable to U.S. productions. It’s impossible to find more money in France, so we do what we can. The preparation is very important: We cannot waste anything.

Where was the bulk of the animation done? Was it all hand-drawn 2D?

The majority of animation was created at Folimage, our studio in Valence, in the south of France—a region where life is good. Folimage is a studio that I created in 1981, and it will celebrate its 30th anniversary this year.  Only a small portion (around 10%) of the animation was made in Italy by Enarmonia, a co-producing studio in Torino. 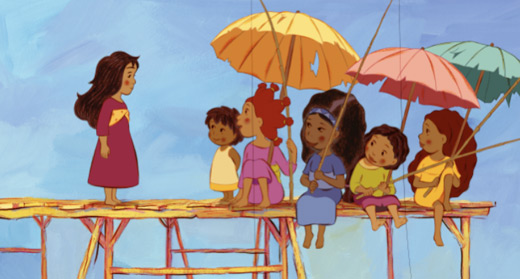 What was the inspiration for the story?

I like the idea of a strong little girl who has nothing, who runs into a fantastic being who possesses great power. But all of that is relative, because Mia is actually stronger than the giants. When we want, we can. Everything is possible as long as you have courage and willpower. Nothing is irredeemable, and peace and harmony always triumph in the end. We can find Bin Laden. We can stop the madness of nuclear generators. We can reconcile and pardon. Man is perfectible… the story of Jekhide [character in the film] shows this.

Can you tell us a bit about the visual style of the movie.

We looked to create a visual universe unique to the film, inspired by the text. Benoit Chieux imagined an original graphical look that required many months to realize. The inspirations for this universe come from our pictorial culture in France, Henri Matisse, Paul Cézanne, and above all, Raoul Dufy. A gestural layout, very loose, colors which play with the lines, and a grand chromatic vivacity—all coming from warmth and mystery. 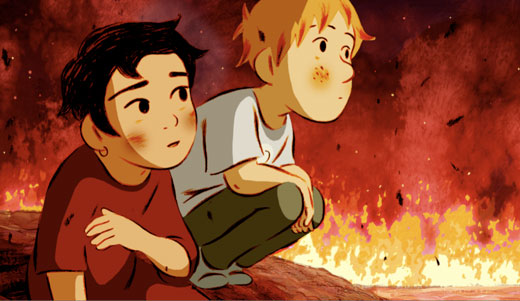 Why do you think there has been such a big renaissance in French feature animation?

There are many reasons. New schools have now trained students at a high level. A democratization of means for making movies. A fish-tank of important French artists, illustrators, colorists and animators. A bigger interest from French financiers than in the past. And maybe there are some artists from a new generation who have made the difference.

I don’t really have any. I distrust my heroes. They are often totalitarian.

What was the biggest challenge in producing this movie?

It was weighing a bit on societal behavior. Putting up a signpost for the education of our children, so they acquire a bigger respect for the planet. Convincing certain adults of the urgency of action. 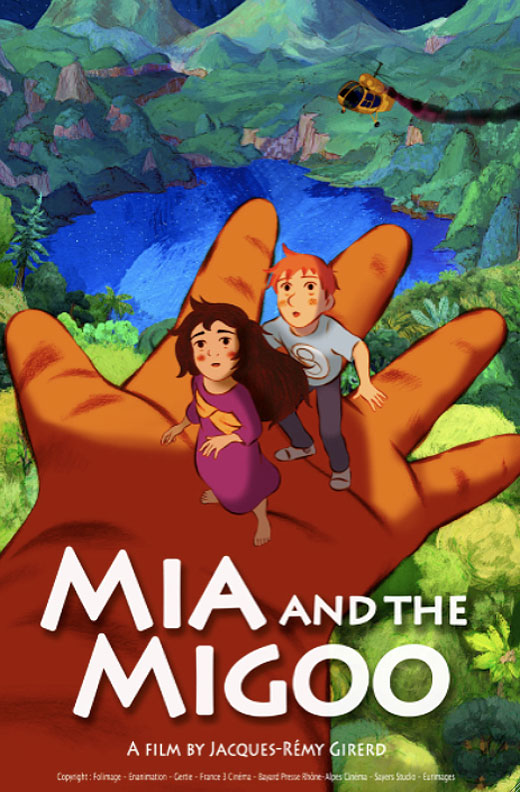 What is your favorite part or aspect of the movie?

I love the tiny feminine movements of Mia, animated by Peter Dodd. I love the colors of Jekhide and his white teeth, which seem more numerous than in a normal mouth. I love certain special effects like the fire. I love the voice of the Migoos. I love the songs and the music of Serge Besset. I love the moustache of the man on his bicycle. And I love the decoration inspired by the Vercors (south of France).

I’ve been working for three years on a new feature film called Tante Hilda! (Aunt Hilda!). It’s going well, but we’ve again gone headfirst into a new aesthetic which requires a lot of work and research to develop the proper look.

We also just released a new film, A Cat in Paris, which was recently presented at the NY Int’l Children’s Film Festival. It’s an animated film noir. Jean-Loup Felicioli and Alain Gagnol, the directors of A Cat in Paris, are working on their next film, which takes places in New York.  It’s called Phantom Boy.

What kind of advice do you usually give young aspiring animators?

I tell simply to put meaning and emotional accuracy in front of virtuosity.

Here’s a trailer for the feature:

You can find out more at www.miaandthemigoo.com.