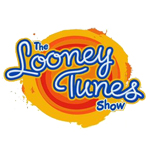 Bugs and Daffy share a home in The Looney Tunes Show, an offbeat new half-hour toon which introduces the classic characters to a new generation of Cartoon Network audiences.

More than 73 years after Bugs Bunny made his first appearance in the short Porky’s Hare Hunt (April 30, 1938), everyone’s favorite wascally wabbit is ready for another go at a regular weekly TV gig. That’s right: Bugs, Daffy, Yosemite Sam, Porky Pig, Tweety and Sylvester, Speedy Gonzalez and even Marvin the Martian are getting another shot at TV stardom when the brand-spanking new Looney Tunes Show premieres on Cartoon Network next month.

Under the supervision of Warner Bros. Animation veterans Spike Brandt and Tony Cervone, who have worked on a wide range of animated series such as Duck Dodgers, Tom and Jerry Tales, Scooby Doo! Mystery Incorporated and Back at the Barnyard, the show puts a fresh spin on the classic Looney Tunes, pushing the envelop by having unlikely roomies Bugs and Daffy sharing a house in a sitcom-y corner of suburbia.

“The show has been in development for about two and half years,” says Cervone. “There have been a lot of twists and turns in the process, but we’re very happy with the outcome. If you look at the big Looney Tunes universe throughout the decades, it’s pretty diverse. Each director was able to put their own spin on these characters. Spike and I have also been living with these characters since 1994, so we have our own ideas about these characters on top of all this history.” 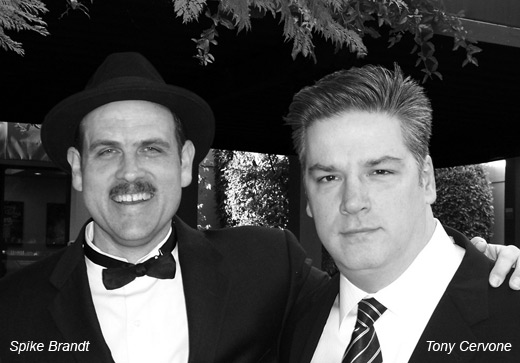 While their environment is new and the show’s attitude is well suited for 2011 audiences, the talented exec producers have fought hard to keep the essence of the beloved Looney Tunes characters. “Although essentially, the characters are part of a sitcom world, we didn’t want the show to be about the crazy situations they find themselves in—the series is going to be a character and actor-driven show,” says Cervone.

Cervone and Brandt tell us that at one point in development, the series was a variety sketch show made up of fast and furious micro-shorts. “We were putting material on storyboards and spent a good amount of time seeing what was working and what wasn’t,” says Brandt. “Eventually it turned into the show that will be airing next month.”

In this brave, new Looney world, Daffy and Bugs are now sharing a house, possibly because Daffy has fallen on hard times. “He has been mooching off Bugs for a while,” explains Cervone. “In the classic Chuck Jones shorts, there was a friendship between them, but it was adversarial. In our show, their friendship isn’t quite as adversarial, but it’s a bit edgy. Bugs is somewhat amused by Daffy and Daffy needs the stability that Bugs brings. Porky Pig is the third friend: Here he is the sweat-hearted, everyman that he has always been. Bugs is pretty decent to Porky, but he gets him into trouble sometimes. Here we see Bugs and Porky interact which they never explored in the old cartoons.” 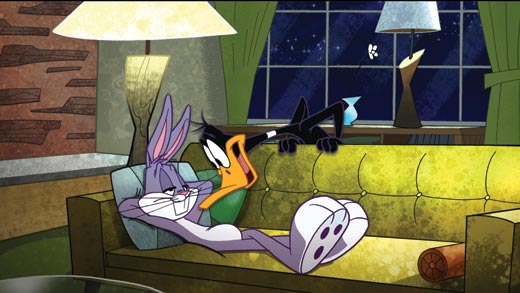 But wait—there’s even more madness in store. Let’s not forget that Foghorn Leghorn is also playing a part in this world. “He’s an eccentric billionaire, a major tycoon who hits it off with Daffy, because he appreciates his honesty,” says Cervone. “They get along very well together, and it was surprisingly fun for us to explore their friendship.”

Also back for their 2011 debut are Yosemite Sam, Granny, Tweety and Sylvester, all of whom also live in Bugs and Daffy’s hood. Minor characters such as Witch Hazel and the hairy red monster known as Gossamer have also been updated and included in the colorful cast of characters. “The witch lives next to Granny (who is voiced by toon legend June Foray) and she’s more of a single mom now, while Gossamer is now her son. He’s a big monster, but in reality, he’s just an eight-year-old trapped in a big body.”

Cervone and Brandt also mention that Speedy Gonzalez (who is now voiced by Saturday Night Live’s Fred Armisen) also lives in the house with Bugs and Daffy. “He’s almost like Daffy’s Jiminy Cricket,” says Brandt. “He tells Daffy when he’s done something terrible. In a western, Speedy would be the bartender, because everyone feel’s comfortable to talk to him.” 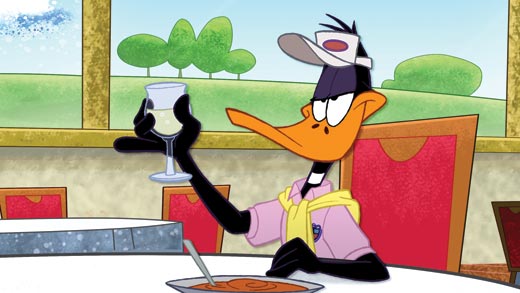 Lola Bunny, who was originally created for the 1996 live-action/animation mix feature Space Jam, is another key character on the show. Voiced by SNL’s Kristen Wiig, Lola brings a certain chaotic energy to the mix. “She’s charming, cute and unpredictable,” says Cervone. “She has the same kind of chaotic energy that Daffy brings to the show—very much like a screwball comedy. You can definitely see that we’ve taken up the voice acting to a higher, more complicated and sophisticated level on this show.”

Because The Looney Tunes Show was created to match the rest of the cutting-edge shows airing on Cartoon Network today, Cervone and Brandt point out that a lot of care was given to add some new pizzazz to the familiar. “Our lead designer is Jessica Borutski and she has brought something that’s fresh and energetic and more streamlined to these characters without throwing them under the bus,” says Cervone. “Probably at first blush, some may think that, ‘Wow…this is really different,’ but it’s truly a mix of the familiar with the new, both in the visuals and in the scripts.” 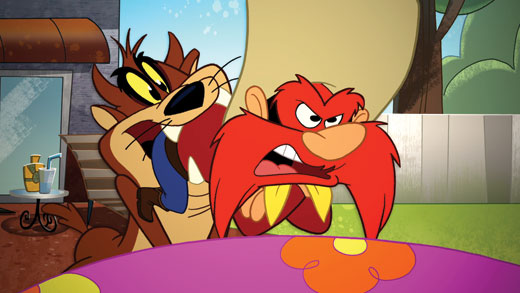 The producers tell us that at one stage in the show’s development, there was an attempt to make the characters younger. “That completely rubbed us the wrong way,” says Brandt. “In the classic Looney Tunes, they felt like adults, so when Bugs was made younger, it just didn’t feel right to us. We wanted the old Bugs back. It’s important to know that the old characters were adult characters with adult relationships and adult concerns. They felt like regular people and that’s why they were so popular. They really represent the human condition better than any other characters.”

In addition to the regular sitcom portion of the show which runs about 18 minutes long, each half-hour also features board-driven, musical Merrie Melodies sections and CG-animated Road Runner and Wile E. Coyote segments, produced by the same team that gave us the three Warner Bros. theatrical shorts of 2010. (In addition to Burbank-based Warner Bros. Animation, Korea’s Yearim Productions and Rough Draft Studio, Philippines’ Toon City and Israel’s Crew 972 are involved with the production.)

“We were very excited to have these additional segments in the show,” says Cervone. “The Road Runner cartoons are built around one single idea per segment, while we get to explore different storylines in the main section of the show. The Merrie Melodies sections are song-driven, and that also fits the Looney Tunes heritage because music has always played a big part in their history. It’s nice to be able to feature Marvin the Martian in one of these musical segments, because that’s when we get to explore characters from his world that don’t fit with the main storylines. Visually, they also let us with play with different styles.” 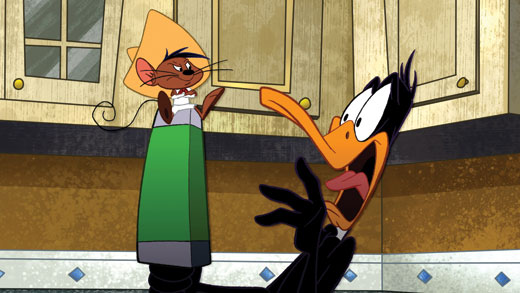 One thing the two animation veterans are really not concerned about is how Looney Tunes purists are going to receive the show. “We know that people love these characters, and we know that people are going to get riled up when you do something new with these characters,” says Cervone. “We expect it and we count on it, but it doesn’t make us rethink our approach to the material.”

Brandt agrees. “What’s neat about it is that the show has a modern sensibility,” he explains. “After all, this is 2011 and we’re not doing a show that would be on the air in the 1950s.” Cervone adds that the style of the comedy is more modern. “This is a machine-gun-edited show. The pacing, the cutting; the show takes a very purposeful stance on everything, and it’s not a very noisy show. The music is very carefully place. Overall, it really requires an investment on behalf of the viewer.”

Cervone says that he is especially excited about the new relationships and new facets of the characters that are cultivated in the show. “There are lots of elements about the show that come with the classic identities of the characters, but there are also lots of things that are very specific to this particular show. It’s nothing like we’ve ever seen before.” Brandt echoes these feelings. “It’s been really fun watching the show develop and to be able to bring the best cartoon characters ever created back to TV. I think we were lucky to find a group of people that really got the sensibility of our show. Most of all, we’ve been very fortunate to be able to work with some of the greatest cartoon characters of all time.” 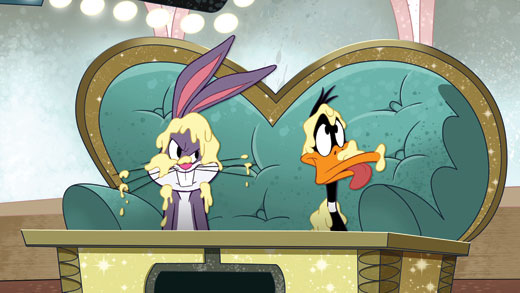 The Looney Tunes Show premieres on Cartoon Network at 8 p.m. on May 4.