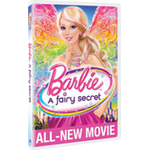 ‘Batman: Brave and the Bold’ and ‘Barbie: A Fairy Secret’ on DVD

It’s the Caped Crusader and the world’s favorite doll swooping in to the rescue with new video releases perfectly timed to stave off bouts of boredom.

This set also includes the musical episode, in which Batman takes on the Music Meister, voiced by Neil Patrick Harris. The episode was nominated for an Emmy for Outstanding Music Composition for a Series (Original Dramatic Score).

If princesses are more your speed, then you’ll want to check out Barbie: A Fairy Secret (Universal, $19.98). This new animated adventure begins with Barbie learning fairies are all around us — and they’ve got Ken!