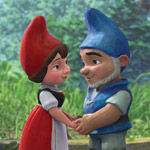 Love and the Star-Crossed Lawn Ornaments

Director Kelly Asbury and producer Baker Bloodworth talk about the challenges and rewards of their new animated movie Gnomeo and Juliet.

It’s certainly not surprising that a stellar British cast led by James McAvoy, Emily Blunt, Michael Caine, Maggie Smith, Patrick Stewart, Jason Statham and Julie Walters have lent their talents to a new version of Shakespeare’s Romeo and Juliet. The big eyebrow-raiser may be that the project is a stereoscopic 3-D, CG-animated movie set in the world of garden gnomes, featuring music by Elton John and Bernie Taupin! That’s right: It’s a comedy-adventure about a couple of star-crossed lawn ornaments named Gnomeo and Juliet!

“What intrigued me about this movie from the very beginning was that it had three very separate and unrelated elements,” says the pic’s director Kelly Asbury, the well-respected animation veteran who helmed Spirit: Stallion of the Cimarron and Shrek 2 during his time at DreamWorks. He remembers getting the call from producer Baker Bloodworth about five years ago when he was asked to lead the project. “I thought to myself that while these elements may sound incongruous, I was up for the challenge. I am a huge fan of Elton John’s music and I knew that nobody had made a movie about garden gnomes—and I thought why shouldn’t it be a Romeo and Juliet story? 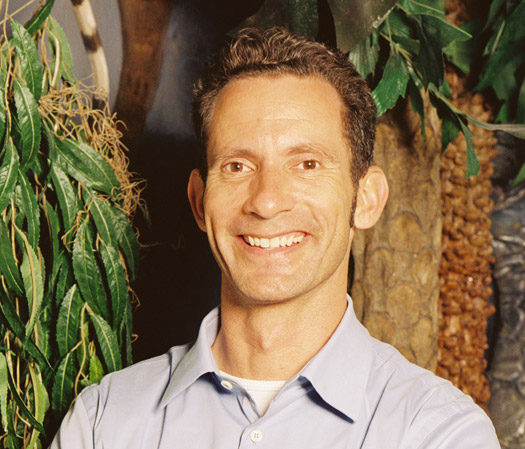 Bloodworth, an award-winning producer, who has worked on a wide range of projects, including Disney’s Pocahontas, Lorenzo, Destino and The Little Matchgirl, tells us that his co-producers David Furnish and Steve Hamilton Shaw had optioned the property in London years ago and brought it to Tom Schumacher, who was president of Disney Feature Animation at the time. “I had just come off of Disney’s Dinosaur and had chaperoned various theme park and internal company projects and noticed the art for this movie on the hallway walls at the studio,” recalls Bloodworth. “I really wanted to work on a musical project again, but everything was moving towards a non-musical direction at the studio. Then when John Lasseter came through the doors at Disney, things were turned upside down again!”

The good news was that although Gnomeo and Juliet was kicked off the priority list at the studio, Bloodworth was told that if he found a way to produce the movie, they would support it in one form or another. The producer says he was thrilled when they were able to bring in Asbury to lead the team after several false starts.

“Having Kelly as director was a real no-brainer,” says Bloodwroth. “He is really hilarious—I knew him from Beauty and the Beast, and I just knew that he was a good fit. So we set up a studio in London and recruited the best talent we could find in Europe.”

While the original plan was to have London shops such as MPC, Framestore or Double Negative work on the animation, the weakened U.S. dollar led the team to move to Toronto after the pre-production stage. That’s where the talented team at Starz Animation worked on the CG animation for about the past 19 months. 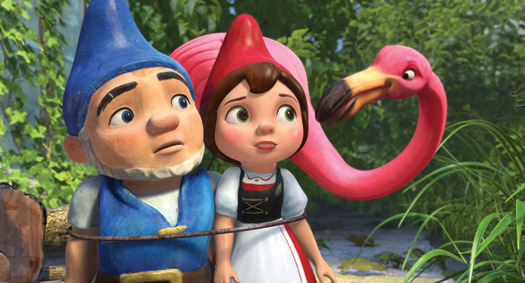 “One of the most important things for us was to make an entertaining film and to keep the narrative engaging at all times,” says Asbury. “Certainly in our case, we had a movie that was based on a Shakespearean tragedy, but we didn’t want our characters to commit suicide in the third act. So they take charge of their destiny—to achieve their happy ending. That’s where we diverted from the basic premise.”

As Asbury explains, the main characters may be garden gnomes, but they are also teen lovers, so their plight is relatable to anyone who has been in love. “We worked hard to capture that moment of first love with sincerity,” he notes. “There is a lot of comedy in the film, but our characters had to be relatable and engaging so that we could hit a lot of different emotional levels.”

Both Asbury and Bloodworth mention that the production team was looking for a realistic quality to its depiction of the garden gnomes. “Lawn ornaments are made out of concrete and plastic, so we brought that realism to the animation,” says Bloodworth. “If you look at Danny Boyle’s movie Millions, he used primary colors and simple lighting to create very focused compositions from a child’s point of view. You can certainly see the influence when you watch our movie. Our gnomes live in two worlds of red and blue. Color plays a big role in our movie. Different environments have their own color scripts.” 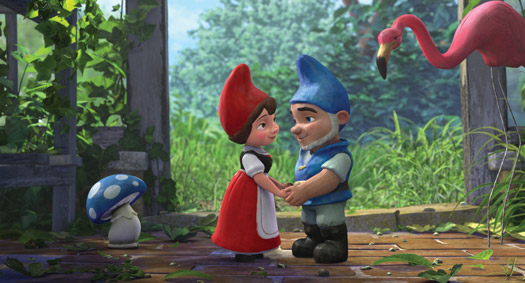 Another key decision involved the design of the gnomes themselves. “It would have been easy to make them Troll-like in design or similar to the gnomes everybody remembers from the popular Gnomes books from the ‘80s [by Wil Huygen], but we wanted something different,” says Bloodworth. “Garden ornaments are kind of ugly—so Kelly had this tough challenge of making them appealing, but being true to that world.”

The gnomes were designed by famous British designer Gary Dunn, whose credits include The Tale of Despereaux, Sinbad: Legend of the Seven Seas and the TV series Charlie and Lola. “He was so good at finding these characters with his designs that Kelly asked him to do the entire cast,” says Bloodworth. “He took this hideous gnome idea and transformed it into something that was truly appealing.”

While the team worked with a budget that was far less than your typical Disney and DreamWorks extravaganza, Starz was able to deliver a 3-D movie that is quite a feast for the eye. ”We had a finite budget, so we had to make certain choices—and the choices always involved telling a better story,” says Bloodworth. “The wonderful art direction by Karen deJong (LOTR: The Return of the King) is organic, beautifully evocative and romantic. We wanted a beautiful world to put our characters in—just like the Toy Story movies, we wanted to keep it simple yet smart.”

Of course, if you’re releasing a big studio movie in 2011, you have to worry about the 3-D factor. Bloodworth says he remembers how painful it was to watch Disney’s Chicken Little in 3-D less than six years ago. “That’s not the case anymore,” he adds. “More people know how to do it well, and we had Eric Deren, who led the team in Toronto and did a great job of using it well, simply supporting the action.” 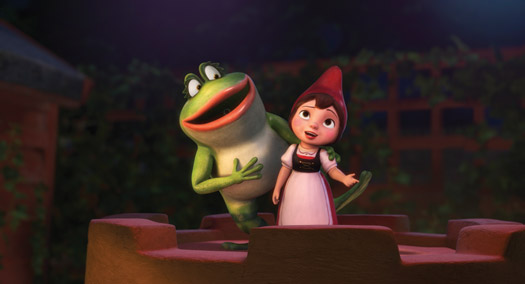 Asbury says he pushed for the film to be 3-D from the very beginning. “We made a good part of the movie in 3D, without having to convert,” says the director. “The scale of the characters, the places you can put the camera, the garden, the leaves—they all make the use of 3-D very appropriate.”

One of the big parts of the movie’s puzzle has been the timeless music of Elton John. Although John’s husband, David Furnish, is one of the pic’s producers, it was a given that he would play a big role musically in one form or another. While he was originally paired with lyricist Tim Rice (Aida, Evita), it was decided that the characters weren’t actually going to sing the songs, and the music was going to be used to follow the action. That’s when John’s frequent collaborator Bernie Taupin stepped in. Two original songs by the duo as well as several from their classic catalog—“Your Song,” “Saturday Night’s Alright for Fighting” and “Don’t Go Breaking My Heart”—are featured in Gnomeo and Juliet. The film’s score is composed by James Newton Howard, who was part of Elton John’s band at one point in his career.

“It’s very accessible,” says John about the picture. “It’s very funny, and because it’s quite colloquial and British, we can make it even funnier.” Asbury says the legendary singer-songwriter was very moved when he saw the final version of the film. “He was wiping tears when it was over. He said he always knew it would work well as an animated film, but that it worked on a much higher level.” 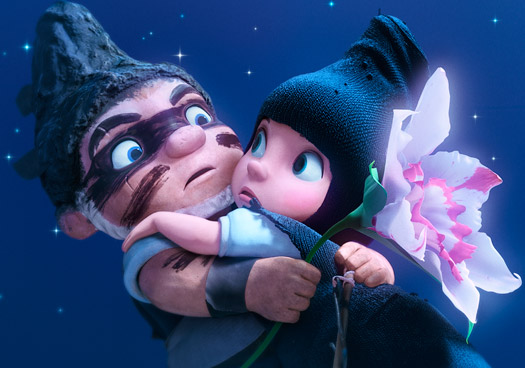 “What I really liked about the project was that it has real heart, and there were real stakes involved,” says Bloodworth. “I am a romantic at heart—in fact, while we were in production in Europe, I met the love of my life and I’ll be moving there to start a new life with my partner this year. The theme of the movie is that love can overcome hate; that’s universal. It plays to everybody.”

Disney releases Gnomeo and Juliet in theaters on February 11.

“While our movie was based on a Shakespearean tragedy, we didn’t want our characters to commit suicide in the third act. So we had them take charge of their destiny—to achieve their happy ending. That’s where we diverted from the basic premise.”