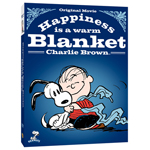 Peanuts Return For DVD of ‘Happiness is a Warm Blanket’

Charlie Brown, Snoopy, Linus and the rest of the Peanuts gang are coming back to animation in Happiness is a Warm Blanket, Charlie Brown, an original DVD feature set to be released March 29.

The feature is the first new Peanuts special in five years, and tells the tale of Linus trying to ditch his dependence on his blanket before his grandmother takes it away from him. The story is adapted from specific episodes of the famous Charles M. Schulz comic strip.

Craig Schulz, son of the late creator of the series, is executive producer on the show, along with Stephen Pastis, Paige Braddock and Linda M. Steiner. Andy Beall and Frank Molieri are directing the feature from a script by Pastis.

The DVD will be released by Warner Home Entertainment with suggested retail prices of $19.98.