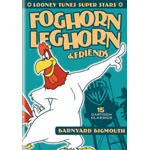 It’s a huge week for Disney fans as the house that Walt built releases a true classic, its modern follow-up and a trio of documentaries that animation history buffs will find invaluable.

Up first is the release on DVD and Blu-ray of Fantasia and Fantasia 2000 (Disney, $39.99 DVD, $45.99 Blu-ray). The discs are packed with bonus features, including a new audio commentary on Fantasia by Disney historian Brian Sibley and on the Blu-ray edition of Fantasia 2000 the seven-minute collaboration between Walt Disney and Salvador Dali, Destino, complete with a feature-length documentary on its making.

Also out this week is the most-recent entry in the growing category of motion comics, with Marvel’s Iron Man: Extremis (Shout! Factory, $14.97), adapting the comic story by Warren Ellis and Adi Granov, and Sid and Marty Krofft’s Saturday Morning Hits (Vivendi, $14.93).